Soccer: more than a passion, a style of life 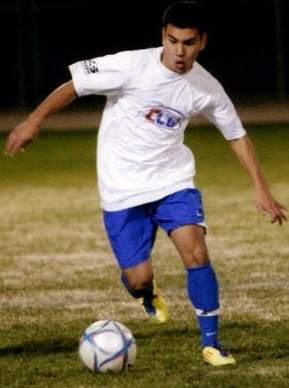 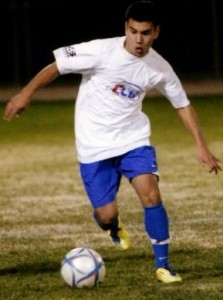 GREENFIELD–Though many people have multiple passions in life. For some people, a single passion- is their life.

Juan Bernardo Alvarado, 18, a senior at Golden Valley High School one passion is- soccer.  The varsity player is considered a soccer legend among high school students.

Since his freshman year, Alvarado took his position as starter center midfielder. His performance has been regarded as “excellent,” he is “a terrific distributor,” and “plays a big role on Golden Valleys possession of the ball” as reported in The Bakersfield Californian, during games.

Yet, Alvarado’s passion is not a recent discovery. Since the early age of five, his father introduced him to the family played sport – soccer.

“I started playing and liking the sport,” said Alvarado. “and also getting better day by day.”

His hard work and dedication paid off in the launching of a successful career. School teams, Central California Blues, Bakersfield Brigade, and South Valley Thunder:  are just few of the local Bakersfield teams to which he has contributed.

Teamwork, for Alvarado, holds an important value, “being in a team together, you have to get along well because you’re working on the field together.”

This open mindset has allowed for him to not only participate in high quality teams, but also win important championships, such as the CA Cup, the West Coast Championship and the prestigious Valley Championship.

Confidence and optimism are what motivates Alvarado to continue with a successful season.

“We’re a pretty good team, we should be able to make it to [Valley] Finals this year,” he said.  “The win is in the eye of the beholder. When you lose, it’s like you let down the whole school and I don’t like losing.”

Alvarado plans to use soccer to open door for him in the future.

“I want to get a scholarship and go to college… then I’ll see what happens with my career,” he said.

When asked about playing professional soccer, he expressed both doubt and hope: “It’s hard, but anything can happen…”

The humble spirit of this player manifests itself in his being. He values training as games played against some of the world’s best teams, including Mexico, Puerto Rico, and Brazil during the Dallas Cup tournament.

Surprisingly, he does not admire a renowned legendary soccer player like Pele or Ronaldo, but rather a local student from East High School whose greatest achievements were participating as a player for the National Soccer Team.

When asked about his own talent and ability as a soccer player he laughed and honestly responded, “I don’t really like judging myself, I don’t want to sound cocky… it’s better if you ask someone else.”

Alvarado demonstrates quality sportsmanship. His world revolves around soccer, family and church. His spare time is spent with those he loves or watching live games of his favorites, Pumas de la UNAM and FC Barcelona. Even his most prized memory, is that of a tournament in which his last penalty shot earned his team a glorious championship.

The young Alvarado does not hesitate to recite his life motto and quote, which has guided his life: “Soccer isn’t just a sport, it’s a way of life.”