Quintanilla a champion for students 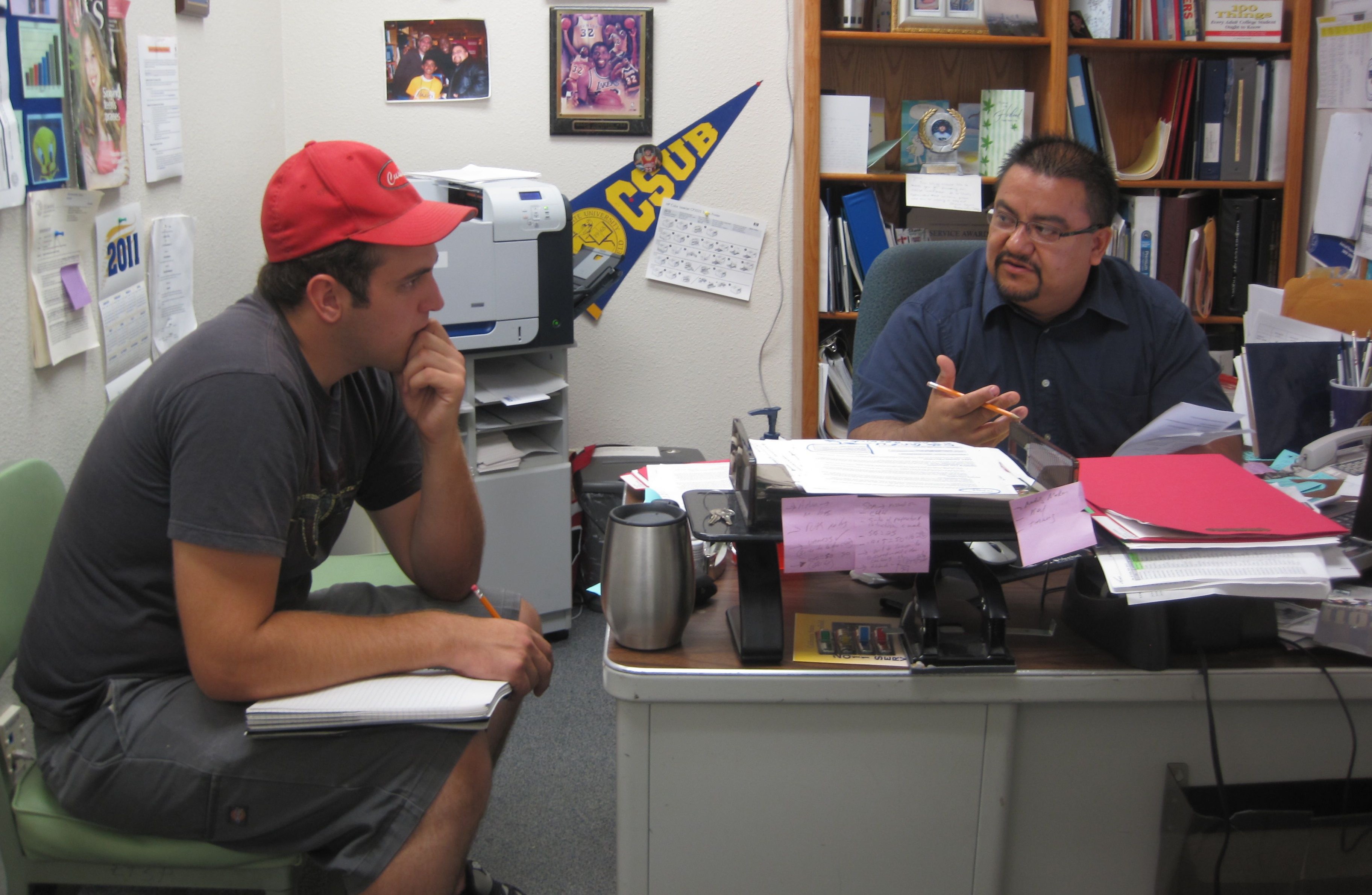 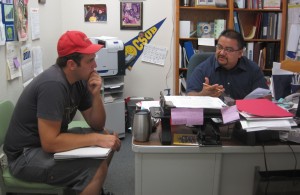 Jesse Quintanilla meets with a student./ by STEPHANIE ESPINOZA

BAKERSFIELD–His door is always open for anyone to stop by. His phone never stops ringing and there is always someone waiting to meet with him for help.

That is a typical day in Jesse Quintanilla’s office.

Quintanilla is the director of the Educational Talent Search program at California State University, Bakersfield.  The program provides academic, career and financial counseling to students from disadvantaged backgrounds and encourages them to graduate from high school and apply to a college of their choice.

Quintanilla is able to relate to his students in many ways.

“I usually have at least one or two barriers that they’ve had: they come from a single parent household, they’re low income, first generation or come from a farm working background,” he said.  “I was there one time.”

Quintanilla and his family came to the U.S. from Mexico when he was only 8 years old.  His family worked in the fields and struggled economically while living in gang-infested neighborhood.

“At first it was difficult to assimilate to the American culture. Mainly, trying to learn the language and becoming familiar to the different customs,” he said. “I was not accepted by my own race and was often called a ‘wetback.’”

At age 15, Quintanilla was scolded by his Kentucky Fried Chicken supervisor for dropping a tray of chicken and was told that he was not good at anything.

As a young man, he really did believe that he didn’t have what it took to succeed in life.

His life turned around when he met his high school sweetheart Cynthia Davis in 1985.

“No one had ever talked to me about college before,” said Quintanilla.  “She was the first person in my life that said I had the potential to succeed in life.”

In 1988, he started school at Bakersfield College and the following year his daughter Christina was born.

It took a couple of years before he completed his associate degree in 1995.

“I dropped out of BC a couple of times because I felt the responsibility of being the breadwinner,” said Quintanilla.

In 1998, he quit his bus driving position of 12 years at Beardsley Elementary to complete his bachelor’s degree in sociology at CSUB.

Quintanilla didn’t stop there, however.

His wife kept pushing him to pursue higher education. In 2000, he completed his masters degree in educational counseling at CSUB.

“I always knew I wanted to help out kids and make a difference in their lives,” he said.  “I love my job working with the ETS program motivating students with the same barriers I faced.”

Kern County is known for being mainly a blue collar and farm working community with low graduation rates.

“Statistics show that if you come from an at risk community it’s going to be hard for that person to achieve upward mobility,” said Quintanilla.

Despite this Jesse has been following many students from junior high to college.

“I’ve seen a lot of my students graduate from college,” he said.  “It’s really a sense of accomplishment that you’ve done all that you can for them.”

Since 2000, he has been helping out students from non-target schools in the South Kern area through the ETS community component.

One of the first students that Quintanilla helped out from South Kern was Jose Gomez, who graduated from Arvin High School in 2002 and is currently pursuing his Ph.D. in microbiology at Stanford University.

“He was very motivational in the sense that you felt that you had someone to go to in terms of being able to get advice and feedback,” said Maria.  “He really does have a way of handing over the educational capital that we lack as first generation college students not being able to receive that from our own parents.”

Maria received her bachelor’s degree in 2007 from UC Berkeley and is currently working as a research assistant in San Francisco.

Maria and Jose are just two of the many students that Quintanilla has helped succeed.

“I always tell my students that they can accomplish anything as long as they tackle it with heart and dedication,” said Quintanilla.

He also encourages his students to give back to their community.

“I always let them know that when they become something in life, to give back to their community,” he said.  “I think if everybody made a difference in somebody’s life it would make the world a better place because people will become more educated and motivated.”

Quintanilla’s biggest accomplishments in life have been graduating from college, meeting his wife and seeing his daughter graduate from UCLA.

When Quintanilla isn’t in his office he likes to spend time with his family.

“One of the things that I love to do on a yearly basis is go camping with my family,” he said.  “I also love playing basketball and going to church every Sunday.”