Bakersfield Pride an opportunity for advocacy 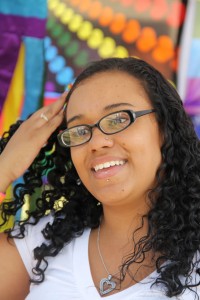 BAKERSFIELD–The Bakersfield Pride Festival was filled with booths, people, and of course, a sea of the rainbow from flags hanging or waving and products with the rainbow print on them.

Booths varied from left to right.  Some were of art, some had information, some were about advocacy and others to simply to sell their products.

“Our business is lesbian-owned. I’ve been to dozens of different Prides and I also have a couple of aunts and uncles that are gay,” said Garner. “(I participate in Prides) Because everyone needs rainbow things, rainbows make me happy.”

Some of the products sold there like shirts and hats were made in Southern California.

Some attendees like Arnea Tanguma, 21, and Cristy Zavala, 18, felt at home. Tanguma and Zavala walked around the event proudly.

“Yea most definitely. Yes, we support them, we gone to Pride events and walkouts,” they said together.  “We do walkouts, we protest through signs and let everyone know we’re not going nowhere.”

“Yes, we are here to support and to show that we care about what’s going on, just being here ourselves and supporting the gay community,” added Tanguma. 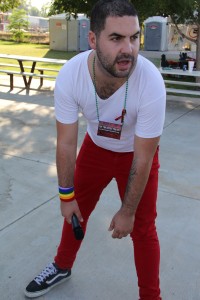 The emcee of Bakersfield Pride was Billie Joe Fox, 24, who’s very open about his sexuality.

“Absolutely, mostly for HIV prevention for youth gay males, by having a socialization group that dealt with HIV Risk reduction that had big turnouts,” he said.  “We held dances that brought over 200 people, our discussion groups consisted of about 30 people. There were supporters and friends of the 30 youth there at events, one dad actually came out to these events. We also had safe sex education groups. I try to be around activism.”