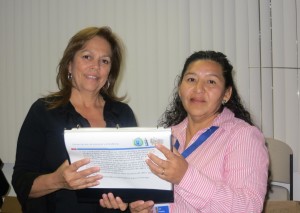 When Lilia Rebollar came to the United States from Mexico, the only work the former nurse could find was in the agricultural fields of the Eastern Coachella Valley.

She spent the next several years as a field laborer and focusing on her duties as a wife and mother of three. But her desire to help others remained.

When her children were older, she found the perfect opportunity for community involvement in the newly-formed parents’ council at Desert Mirage High School. Now that her children are grown,  the Oasis resident has found a new way to help the community.

Rebollar has become a promotora for Clinicas de Salud del Pueblo in Coachella. In this role, it is her duty to learn about important environmental issues, from air pollution to pesticides, and share this knowledge directly with residents. Her current focus is educating herself and the community on arsenic contamination in the supply of water.

“This is because we are seeing that this is the biggest problem we have right now,” Rebollar said, in Spanish.

The other big problem is lack of awareness, which is why Rebollar says the work promotoras do is crucial in the communities of the Eastern Coachella Valley..

“There is a need for promotoras such as myself because we take the information to the people,” said Rebollar, who often delivers brochures and flyers door-to-door. “Sometimes they know they are ill, but they don’t know the reason why, or where to turn for help.”

Even though her children are out of the house, Rebollar’s community involvement doesn’t come without personal sacrifice.

“From my own experience, one of the obstacles we face as promotoras are our husbands,” she said. “They don’t accept it. They’re the ones who are supposed to be out working, and we’re supposed to stay at home.”

Nonetheless, Rebollar said that now that she has the opportunity to follow her passion, she is not going to let it slip away.

“I enjoyed helping people as a nurse, but I had to leave that behind,” she said. “Now that I have this opportunity, I want to do it the best I can.”