‘Every 15 Minutes’ Gives A Lifetime Dose Of Reality 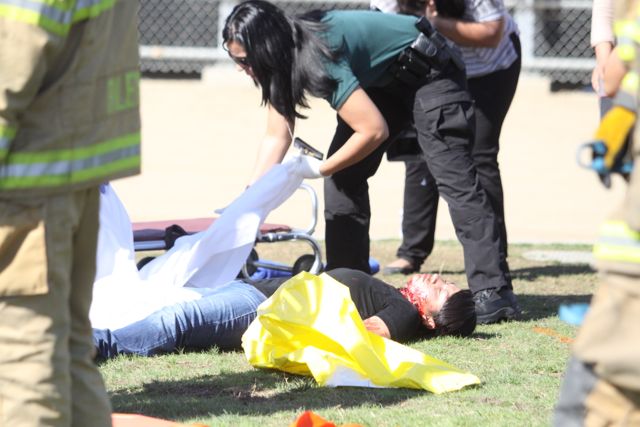 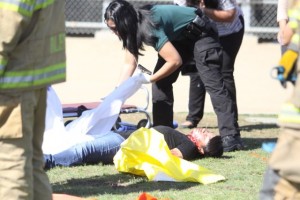 'Every 15 Minutes' gave students a 'mock' view of what happens during a drunk driving-related car accident./ Photo by FABIAN GONZALEZ/South Kern Sol

ARVIN–Arvin High School junior and senior students were invited to experience an alcohol- related crash scenario where student peers were involved in being ‘the walking dead.’

The “Every 15 Minutes” program is on its website as “an event designed to dramatically instill teenagers with the potentially dangerous consequences of drinking alcohol and texting while driving” and offering “ real-life experience without the real-life risks.”

It got its title because someone is involved in an alcohol-related crash every 15 minutes in the United States.

Elizabeth Vasquez, 17, was one of the students that was involved in the crash and was dead at the scene.

Vasquez described the experience as being “scary” due to seeing “what really could happen and experience what’s going on.”

The following day students went to the school’s auditorium where they attended a mock funeral.

As students settled down in their seats the ‘dead’ students came into the auditorium each caring a red rose. They walked to a gray casket and laying the rose upon it.  Then each read their goodbye letters, they had written for their parents.

Jaqueline Zamorano said she “was shocked” after one of the speaker’s speech.

“I started crying during Michael Benge speech. In 2004 him and his wife with his three daughters were involved in a alcohol-related crash where a teen driver was under the influence of alcohol,” Zamorano said. “His wife passed away at the scene and his daughters had serious injuries but later survived.

Now Benge is talking at schools to try to reduce accidents due to DUIs.

Having the thought of what could happen in a alcohol-related crash in mind, students went on with their day but still talking about what impacted them the most from the event. 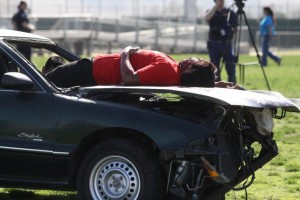