The Degrees Of Domestic Violence 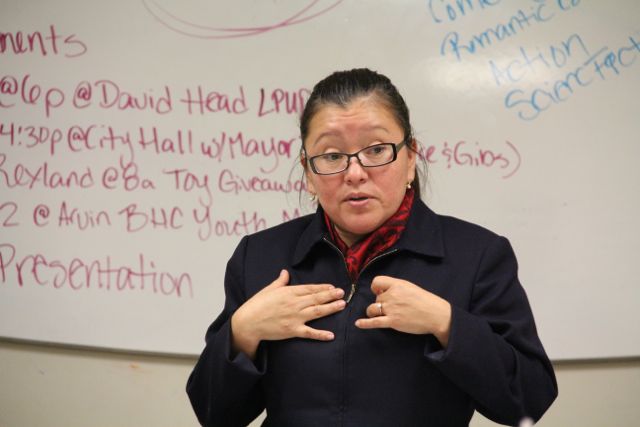 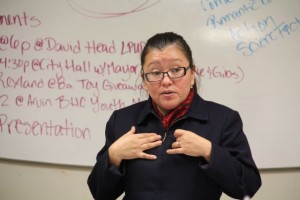 ARVIN –Recently, conservative republicans opposed Violence Against Women Act because the act would extend its protection to same sex couples and undocumented residents.

The fight isn’t over for those, who protect victims of domestic violence. This past fall, Greater Bakersfield Legal Assistance Paralegal Carmen Burgos did a domestic violence presentation for the Building Healthy Communities South Kern Youth Group. Although the presentation was for the BHC South Kern Youth, the information is important to everyone.

Burgos, who has been a paralegal for 12 years, has seen her share of domestic violence cases.

Burgos said most often victims of domestic violence confuse actions by their abusers. They see it as love instead of control.

“What most women mistake with ‘caring about me’ or ‘he must really love me’ is actually abusive behavior. The husband having to know where you are, who are you around, how much time it takes to get from one place to another, restricting use of clothing -where husband picks out outfit or does not allow you to wear a certain shirt,” she explained. “It can be easily confused with ‘oh he really loves me instead of thinking of it as abusive behavior.’ The abuser wants to be in control, it is not because they love you.”

Burgos pointed out the common misconception with domestic violence that it has to be physical. Although research still shows women as the victims, a growing number of men are victims of domestic violence.

“Domestic violence is not only physical, but it is also psychological and emotional. Emotional abuse hurts the most. Culture plays a very big role in why the person is abusive. The myth though is that for it to be abuse, it must be physical abuse which is not true,” said Burgos. “Men were not born abusers. They saw it as a child and learned the behavior. Hispanic women do not want to be ‘embarrassed,’ therefore they never speak about their relationship problems. It stays within the household only.”

Carmen explained how clients sometimes come to her office to speak to her. They’re often broken spiritually and emotionally. Helplessly, women have thought of many ways to stop the abuse during their relationship.

“If it happened once, it will most likely happen again. Girls think that abuse will stop if ‘I get pregnant’ it will stop,” she said. “But this in turn gives there more reason to stay within the relationship. Because, now there is more responsibility for the woman like who is going to support and take care of the child and me? Living that kind of relationship is hard.”

Statistics have shown it takes up to nine tries before leaving the relationship. When the victim decides to leave it is when the physical abuse is at its peak.

However, there are several things a victim can do to protect themselves. If there domestic violence occurs, you must immediately call 911. The victim can request an Emergency Protection Order, which is a restraining order. This is where the abuser has to leave the house for five days until things either cool down or they met in court after its effect. Even the undocumented residents can apply for this order. When the couple meets in court, a Civil Restraining Order can be requested by the victim and granted.

“If you want to help victims just to listen to them and giving them emotional support,” she said. “Make sure that victim must acknowledge the abuse and must not minimize it, victims must be share and tell.”

Burgos said there’s help for women, who aren’t U.S. citizens and feel they must remained with their abusive spouses to gain their citizenship.

“The Violence Against Women Act was passed in 1994, it is only for married couples, when the spouse uses immigration status against the women or to keep them trapped, it allows for women to file a petition to become a citizen without the knowledge or consent of the spouse, but they have to prove that the marriage was based on love and was legitimate,” she said. “As of 2002 a U-Visa is given as well but the victim must testify and cops need to accord with found evidence and must also approve as well that it was abuse. These protections are not only for abuse victims but also victims of any crime.”