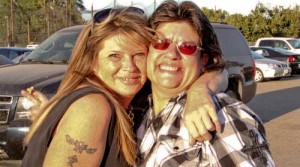 And that’s why it has been so successful, says local LGBTQ activist Whitney Weddell.

Bakersfield celebrated its 10th annual Gay Pride event in October, with the theme “A Family Reunion.” There was no shortage of families with young children on hand. A colorful, inflated “bounce-house” was the centerpiece of a kids’ area, which gave Bakersfield Pride an atmosphere quite distinct from the pride festivities held in big cities.

“It’s like that by design,” said Weddell. “Bakersfield Pride has always been about families, about teenagers. We want people to be comfortable.”

The idea of organizing a Gay Pride Parade in this conservative town at the southern end of California’s Central Valley might seem like a dangerous enterprise. But the annual parade has become a welcome event in the community.

“People in San Francisco might think of places like Bakersfield and think, ‘Oh my god, it must be like Russia,’ but it’s not like that at all,” said Weddell. “There’s a very small, very vocal minority of people who I’ve come to understand are very much a minority; but for the most part, it’s very live-and-let-live.”

As proof, she notes that while Bakersfield Pride is a 10-year-old tradition, it has never drawn protesters.

She cautions, however, that the community in general seems to be much more tolerant of gay women than men. And members of the transgender community, she says, continue to be targets of harassment and ridicule.

At recent school board meetings, for example, parents heatedly expressed opposition to AB 1266, the “bathroom bill” signed by Gov. Jerry Brown last August that gives transgender students the right to access gender-assigned bathrooms and locker rooms at their discretion, in order to avoid bullying or harassment. Those reactions, says Weddell, showed that where transgender issues are concerned, the Central Valley still has a very long way to go.

Weddell’s advocacy group, Bakersfield LGBTQ, has been working with district and city officials to smooth out the implementation of AB 1266 at local schools, which Weddell calls “behind-the-scenes work.”

“We’ve been reaching out to school districts and offering our expertise in the implementation of that law,” explains Weddell. “We’ve been working behind the scenes, working with the school districts in writing the new policy, rather than going to meetings and yelling at the board of trustees, and we’ve had a great deal of success.”

And as with the pride parade, the way they are going about it is distinctly low-key.

“We’re not looking to have our moment in the sun, on TV; we want to get work done,” she says.

Bakersfield Pride drew groups ranging from gay-friendly churches to the Atheist Society of Kern County, as well as contingents from political groups such as the local Democratic and Libertarian clubs. Also present were non-profits such as the Alliance Against Family Violence and Sexual Assault, Planned Parenthood and even local corporate employers like Chevron.

“San Francisco is wonderful, and exciting, and exotic — and a little scary,” says Weddell, with an ironic laugh. “But this is hometown pride, and everyone is welcome.”