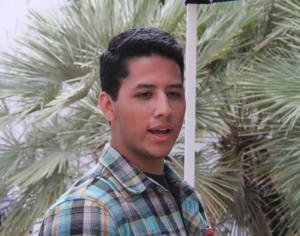 BAKERSFIELD, Calif. — This past Wednesday, immigration reform supporters including Cal State Bakersfield professor Gonzalo Santos, and Andres Chavez, the grandson of the late Cesar E. Chavez kicked off the national ‘Fast for Families’ campaign with a 24-hour hunger strike at the Liberty Bell in downtown Bakersfield.

“There are sixteen of us fasting, but we’re trying to speak for 11 million people,” said Maria Barajas, 21, a first-generation immigrant raised in the United States. “We have to all somehow let all of our voices heard so that together we can accomplish this.”

Despite a politically conservative climate, Kern County has seen a new generation of activists picking up the torch for civil rights: all but three of the 16 strikers were part of that new generation.

While those participating in the fast were united in their demand for comprehensive immigration reform, their reasons and motivations varied. For some hunger strikers, like Santos, the fasting was a show of solidarity for others, particularly those who cannot put themselves out in the spotlight for fear of deportation.

The ‘Fast for Families’ is part of a national effort which kicked off mid November, where immigration reform supporters are refusing to eat until immigration reform legislation is passed by the House Republicans. The hunger strike included a camp-in by the strikers and a table was set up for supporters to sign a card pledging support for comprehensive immigration reform. These cards will be sent to Bakersfield Congressman House Majority Whip Kevin McCarthy.

“The main reason I’m here is to get to the hearts and minds of the American public and get them to support immigration reform,” explained Chavez. “By letting them know that immigrants made this country great, and will continue to make it great, we can try and get support for immigration reform.”

Tania Bernal, a hunger striker and a child of immigrants, struggles to extend the rights she was granted to her loved ones. She sees it as her responsibility to advocate for others with the protections afforded to her.

“My parents are immigrants, and to this day there’s no equality, no justice,” explains Bernal. “Throughout history, immigrants have always been discriminated against and their children treated like second-class citizens, but we have to fight to make the change.”

For Barajas, the struggle was far more personal. Being undocumented puts Barajas at a crossroads.

Barajas’ desire to know firsthand the struggles of immigrants led to a struggle within her own family.

“My mom started crying when I went to work at the pomegranate [orchards].” explains Barajas. “She wanted me to go to college and get a better job, but I wanted to go to vocational school and get the experience of working in the fields so I’d know what it’s like, and know what I’m fighting for and who I’m fighting for.”

Erasto Teran, a legal resident, aspires for all the protections afforded to citizens, especially the right to vote. While he waits for citizenship Terran is calling on citizens to give their vote to representatives who support immigration reform.

“What we want to do is give politicians like McCarthy the chance to do something for us and support reform,” said Teran. “But if there isn’t a reform put out in the next year, we boot them out.”

His hope is that the 11 million undocumented immigrants living in the US can become legal residents and citizens.

With the upcoming election year as the next front in the battle for immigration reform, the strikers are searching for more bodies and more voices to join the fight.

“We’re at a good start but we need to see everyone united, our communities pulling together, getting more numbers out here,” said Bernal.