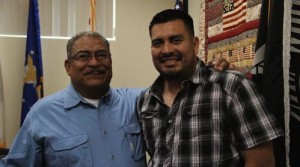 Transitioning back to civilian life after combat was a lot different for 65-year-old Richard Knight than it has been for 29-year-old Wesley León-Barrientos. Unlike during the Vietnam War-era when Knight was a soldier, post-traumatic stress disorder (PTSD) is today a widely recognized diagnosis among younger veterans who have seen combat in Iraq and Afghanistan, and who have more opportunities to get the support they need to cope.

“There are resources available by and for veterans where you can help each other through this,” said Knight, a Vietnam veteran living in southwest Bakersfield, whose untreated PTSD led him down a path of alcohol and drug abuse.

During his darkest moments, Knight sold marijuana and just barely avoided becoming one of the many Vietnam veterans incarcerated in California’s prisons. Today, that group is estimated to make up as much as 25 percent of the state’s prison population.

If Knight had been arrested, he might never have been able to get treatment for his PTSD or receive other critical benefits from the Bakersfield Veterans Center that he now frequents: service members suffering from untreated PTSD who commit crimes or break military rules can be discharged from the military with an “other than honorable discharge.” And veterans who are not discharged honorably are not entitled to receive benefits from the Veterans Administration, including mental health services that can help treat PTSD.

Timing is key for treating PTSD, but often returning veterans don’t recognize the need or are not willing to admit they need help until it’s too late, explained Joe Acosta, a counselor at the Bakersfield Veterans’ Center.

“It’s like the last few weeks before graduating high school: you’re required to go and attend but mentally, you’ve checked out,” said Acosta. “That’s what happens with soldiers about to leave the force, they’re required to attend briefings to transition them back to civilian life, but there’s no way to make sure they actually listen and put the information to practice.”

This was true for León-Barrientos, who was born in Guatemala and served the United States during three deployments in Iraq.

“Yeah, they tell you, ‘this is where you go [for services],’ but at that time, you don’t care about that stuff,” recounted León-Barrientos. “I cared more about being home and I was tired of being away for so long.”

It wasn’t until Leon-Barrientos noticed he was having difficulties spending quality time with his daughter that he realized something might be wrong.

“I used to be really distant, detached. I couldn’t be happy. I would spend time with my daughter by playing a DVD for her, and basically making sure she doesn’t die on me,” he explained. “Now, I take her to the park, we go out to dinner — actually, we like to go ice skating. I use a sled and I just pull her along.”

León-Barrientos said the turnaround came after he began seeing a counselor at the Bakersfield Veterans Center to address the trauma he experienced while serving in Iraq. After driving over a roadside bomb and being hit by 122millimeter rounds, he severely injured both of his legs, broke his back and jaw, and sustained a serious injury to his head.

Incredibly, León-Barrientos established a positive attitude about his physical injuries from the start. He just never imagined that the psychological impact of war would be the biggest hurdle he’d have to overcome. “I felt like I was alive, I would be ok, and it would be hard work to get moving again. But it wasn’t as hard as dealing with the PTSD,” he said.

At the veteran’s center, he was encouraged by Knight and Acosta to get treated for PTSD right away, an opportunity the two older veterans had never had themselves.

“Post-traumatic stress disorder wasn’t even in the DSM (Diagnostic and Statistical Manual of Mental Disorders) when we came back from Vietnam,” explained Acosta. “Plus, the public saw terrible images of what we went through in Vietnam, and when we came back, we were called ‘baby killers’ and things like that, so life for veterans was especially difficult [back] then.”

Acosta says that despite the fact that mental health resources are more available now than they ever have been, there are still many who fall through the cracks and don’t get the help they need.

Leon-Barrientos said the other veterans he met at the center are what made a difference for him.

“Coming here was like finding my brothers and sisters again, because everyone here understands each other. Even with just a look, we understand,” he said.