Garden Pathways Helps Youth Turn their Lives Around After Confinement 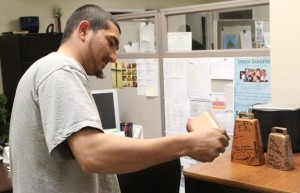 Ed. Note: In 2012 Californian voters approved Proposition 36, the Three Strikes Reform Act of 2012, to address harsh sentences for “strikers” convicted of non-violent, non-serious crimes. Opponents of this proposition argued that dangerous criminals would be released as a result.  In this story three youth from Bakersfield, Calif. tell us how Garden Pathways, a non-profit organization based in Kern County, has helped them turn their lives around.

In front of his mentors at Garden Pathways, Leonardo Diarte, 22, rang a cowbell over the sound of cheers and applause. The bell-ringing is an announcement to his supporters of his accomplishment: Diarte has had steady employment for the last six months, making him a sort of alumnus of the Garden Pathways program, and is now ready to move into the next phase of his life.

For many, his goal to maintain employment might seem like a routine part of life, but for Diarte and others like him, life has been anything but routine. He’s one of millions of formerly incarcerated people struggling to overcome a lifetime of adversity and adjust to a life free of the turbulence that they have become accustomed to.

“My plan is to keep my job and move on up, get a house and stability for my family,” said Diarte, a husband and father of one.

Garden Pathways assists clients like Diarte in not just in filling out applications and résumés, but also with job placement through partnerships with local businesses. Through the program, Diarte was able to get a job as a welder’s apprentice.

But job placement isn’t the key to success for everyone. What really made the difference for Garden Pathways client Jacob Beltran, was how his teacher, Ms. Rodriguez, treated him.

“The way Ms. Rodriguez connected with the students was different from anything I had ever seen,” said Beltran, a 19-year-old client who first met Ms. Rodriguez at the Lerdo Detention Center. “She always had a smile on her face, like she wanted to be there and wanted us to be in class, she was really involved, passionate, and wanted us to grow and heal from the inside out.”

This kind of relationship that establishes trust with people transitioning out of the penal system while they are still in it is what distinguishes Garden Pathways as an organization. Juan Avila, director of operations for Garden Pathways, explains how the relationship begins during incarceration.

“We really stress starting our relationship with inmates while they’re still incarcerated, because many may have trusted other organizations and have been failed, or trusted family members and had that trust broken,” explained Avila. “We have to give build that kind of relationship early because otherwise, they’ll think, “who are you and why should we trust you?”

Beltran, who was arrested for selling drugs, was released early through Proposition 36, a 2012 citizen’s initiative reforming the California Three Strikes Law. The ballot initiative required the third strike, which previously came with a mandatory life sentence, to be a violent or serious felony. Prop. 36 applied retroactively, which enabled Beltran, among many others who had been sentenced to life for a nonviolent, non-serious felony, to be immediately released from prison.

When Beltran met Ms. Rodriguez while incarcerated, he began creating his new life, away from using and selling drugs. But Beltran’s decision to change paths didn’t start in the classroom.

“Five months ago I was on the run, I had a warrant out on me, but I wanted to turn my life around. So I stood out on my dad’s front yard knowing I would be arrested because I needed to get a clear record before turning my life around,” said Beltran.

Through mentoring at Garden Pathways, Beltran not only solidified his desire to change, but he also began to explore the inherent causes for his lifelong entrapment in substance abuse and criminal behavior. It began as a child looking up to his father.

“My family used to all be drug dealers; when I was little, in third grade, I really wanted to be like my dad, and I’d help him iron his bills. Now I know that that’s not what I should be doing, that that’s not helping me succeed,” recounted Beltran.

The kind of life transformations that Garden Pathways strives to evoke in it’s clients begin with the individual’s mental health and family history, according to the Garden Pathways president and CEO Karen Goh.

“We believe it’s essential to address the root issues, and not only superficial issues, to delve at what’s causing people to express themselves in the manner they are,” said Goh. “For many of them it involves dealing with issues and pain from the past: abuse, anger issues, and generational cycles of criminal activity or substance abuse.”

Beltran’s life has turned around such that even his friends have begun looking up to him and want to make the same transformation. 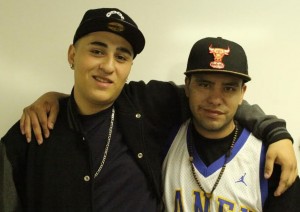 Garden Pathways also has helped prevent incarceration. Antonio Morales, 19, joined the Garden Pathways program when he realized he needed to change his troubled life after he witness his friend get shot and killed right in front of his eyes.

“When I was younger I was with the wrong crowd and I was going nowhere, always finding trouble,” said Morales. “If I was at a friend’s house, we were accustomed to running if we heard a car get too close because we had been shot so many times. Once we heard a car door slam, heard a knock on the door, and someone said, ‘Is someone there’ and when my friend went to check through the curtain, he was shot and killed.”

Morales was fortunate to find Garden Pathways not through the penal system, but through his brother.

“My brother works for Garden Pathways and he brought me into it,” said Morales. “Before this I couldn’t fill out applications, I couldn’t work, I felt lonely, and here I got a mentor, learned to do paperwork, thanks to the help here from my brother and from the staff here.”

Morales was able to receive more than just career counseling; he is beginning to change a lifetime of risky habits and illegal behaviors.

For Diarte, the recent Garden Pathways graduate turned welder apprentice, the program doesn’t quite end yet. His mentor will continue meeting up with him at least an hour per month. Diarte says that in order to achieve a thorough metamorphosis, one has to have the urge to learn and take advantage of opportunities to grow.

“Take that first opportunity you get, don’t go back where you started cause that’s where you’ll stay,” said Diarte. “Take that chance.”