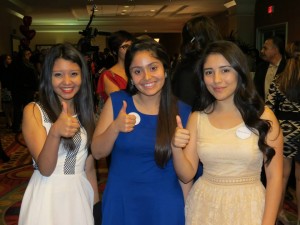 ARVIN, Calif. — Erika Hernandez was ecstatic when she found out she’d been accepted to UC Berkeley in the spring of 2008. But when the time came for Hernandez, who is undocumented, to secure her spot, she let the deadline pass. Her parents, both farm workers, couldn’t afford the college tuition, which was about $32,000 a year.

Because Hernandez started pursuing her college education prior to 2012, she was not eligible to receive either private scholarships or state-funded financial aid under the California Dream Act, a package of two State Assembly bills passed in 2011:  AB 130, effective January 1, 2012, allowed colleges to make private scholarships available to undocumented students. And AB 131, effective January 1, 2013 allowed such students to apply for and receive state-funded financial aid.

Like many undocumented students at Arvin High School, Hernandez was doing everything she could to gain acceptance to a four-year university: participating in extracurricular activities, taking Advanced Placement classes, and preparing personal statements for various schools.  Yet all the while, the financial burden of going to college hovered over her, clouding her optimism.

Dr. Jim Young, her U.S. Constitution team coach at Arvin High, had over the years seen scores of undocumented students give up on their college dreams.  But when Hernandez told him she’d been accepted to UC Berkeley but couldn’t attend due of finances, he felt compelled to step in and help.

“I got to know her through the Constitution team, and she just had so much potential, and she was so broken hearted,” recalled Young.

A former chancellor of Bakersfield College (BC), Young agreed to pay the tuition and fees if Hernandez would agree to attend BC.  He also guided Hernandez through the enrollment process.

“We went out to BC immediately, got her enrolled in classes, and she did very well,” said Young.

As it turns out, the help Young afforded Hernandez was the first step in a process that would lead to the founding of a new program, to help undocumented and college aspiring students fulfill their dream. The College Dream Fund, the non-profit charitable corporation started by Dr. Young, now provides undocumented students in need with $500-$5000 in scholarships to help offset the cost of going to college.  Hernandez became the first student to officially receive a scholarship from the fund, as a BC sophomore in 2009.

“At the start of 2009 I had three students who were undocumented and that’s where the discussion came to create this non-profit,” said Dr. Young. “I was introduced to an attorney, called a meeting, and started the process of starting this corporation.”

Within a year, the fund was already changing lives for the better.

“The College Dream Fund has allowed me to pursue a college degree by helping me pay for my tuition and related expenses,” said Hernandez, who transferred to Cal State San Jose. “I would have not been able to transfer from Bakersfield College, without [the] support and most importantly, the College Dream Fund has empowered me to do what I am passionate about by creating a supportive community of both students and mentors.”

Along with the financial support, stressed Young, mentoring is critical to ensuring that scholarship recipients – all of which represent the first generation within their family to attend a U.S. college – don’t become discouraged and drop out.

“We keep in touch with our students.  We mentor them to make sure we keep them in school,” said Young.

Perla Carrillo, 25, said she is grateful for the College Dream Fund scholarship because it made it possible for her to transfer to Cal State Bakersfield from Bakersfield College.

“The College Dream Fund gave me hope when I thought it was all over,” said Carrillo.

Now entering its’ sixth year, the program is also beginning to see its first graduates.

“Last spring we had our first graduate from CSUB:  Paola Fernandez, [who is now] working on applications for Law School,” said Young.

While many undocumented college students are now eligible to apply for financial aid and scholarships because of the California Dream Act, the College Dream Fund continues to be a critical resource for students when it comes to paying for books and other college expenses that are often not covered by loans or awards.

Ultimately, for Carrillo, what is most important is the life changing opportunity that the Fund gives to students who otherwise would face huge obstacles to affording, and staying, in college.

“It’s hard being a dreamer,” said Carrillo, “but with the College Dream Fund and their support, we know we can [achieve a college education].”