Why I Worked to Restrict Tobacco and Alcohol Use in South Kern Parks, and How We Won 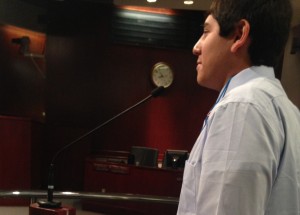 “The purpose of life is not to be happy. It is to be useful, to be honorable, to be compassionate, and to have made some difference so you know that you have lived and lived well.”

These are the words of American poet Ralph Waldo Emerson; it inspires me to everyday ask myself, Have I made a difference in this world?

This past month I could finally say yes to myself – the day I presented to the Kern County Board of Supervisors to limit alcohol and tobacco consumption at our local parks and they accepted our measure.

I along with my partners and now good friends from our Building Healthy Communities (BHC) Recreation team: Ana Karen Yanez, Jose Pinto, Marylou Chavez, Gema Perez, and the teams coordinator Amerika Niño had been working for almost two years to draft two ordinances, one to limit alcohol consumption at parks and only allow it with a permit, and the other to limit tobacco consumption to the parking lot of the parks. Both of these ordinances were made as an attempt to try to make our parks in South Kern safer.

It all started about two years ago during the spring of 2012 when the group was part of a park clean up. The group found numerous cigarette butts, alcohol bottle caps, and bottles littered throughout the park, including the children’s play areas. In addition we also noticed no children or families were at the park. There were only a few people there and what those people were doing was not safe – they were drinking and smoking and leaving their trail behind.  The BHC group discussed the issue and decided that we should draft and ordinance to limit alcohol and tobacco consumption in our community parks: Rexland Acres Park, Digiorgio Park, and Lamont Park.

Our group went door to door, to every house in the neighborhoods where the parks were located to collect over 500 people sign our petitions and we also held several community meetings at the different parks with over 80 people in attendance to hear from the community and let them know what we were doing, and with almost unanimous support of the community we built momentum for our cause and saw the power of what we were doing.

When the supervisors were finally ready to hear from our group on the ordinances that we were proposing, each of the youth went up to speak of our experiences at the park and why we were doing what we were doing.

I stepped up from my seat and walked up to the podium.

Good Morning, my name is Christian Romo and I am here to tell you all today of the great things Building Healthy Communities is doing in my neighborhood by trying to get these ordinances passed today, I said. I told them how everything started, and why it was so important to pass these ordinances.

I can proudly say to you today that I as well as my peers from Building Healthy Communities have made a difference in this world. Though it is only a small change this is just our first step in our greater vision to make our parks and our neighborhoods a safer healthier place.

It only takes a little courage, and determination to make a difference in this world. If you see a problem in your life, don’t wait around for someone to change it, be the change that you seek. Take a stand for what you believe and do something great, that way when you look back at your life you can ask yourself: have I made a difference in this world? And like myself and the rest of the youth from Building Healthy Communities in south Kern you could say yes, I have made a difference.

Come celebrate this victory with us on March 8th, at Rexland Acres Park, 325 E. Fairview Road in Bakersfield from 12:00 p.m. to 3:30 p.m., and learn more about the new ordinance.