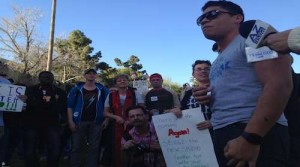 Ed. Note: Arizona Gov. Jan Brewer on Wednesday night vetoed SB 1062. In a statement, she warned the bill’s broad language could “result in negative and unintended consequences.” In a nod to opponents of the bill, who warned of dire economic conseuqences if it passed, she noted that her priority remains “advancing Arizona’s economic comeback.”

PHOENIX, Ariz. – Isela Meraz was among the thousands who gathered outside the Arizona State Legislature last week to protest the right-to-refuse service bill now on the governor’s desk. For Latinos, the bill stirs up painful memories of SB 1070, the state law that criminalized undocumented immigrants four years ago.

Meraz, who is both gay and undocumented, now finds herself fighting on two fronts.

“It’s very difficult for me to choose which battle to fight,” says the 30-year-old who is originally from Mexico. “I feel the pain equally, because my [immigrant] community is suffering, and they are passing a bill at the same time that will judge me for the way I look or who my partner is.”

SB 1062, which passed in the state legislature last week, would allow organizations and individuals in Arizona to refuse service to gays and lesbians on religious grounds.

Supporters, including the Center for Arizona Policy, which promoted the bill, insist that it is designed to protect religious freedom and not to promote anti-gay discrimination.

Opposition, meanwhile, is coming from all sides – including Latino communities, who see the bill as another attempt to discriminate against minorities in the state.

Republican Gov. Jan Brewer, who in 2010 signed into law SB 1070, has come under pressure from local business groups and even members of her own party to veto the current bill over concerns it could further hurt Arizona’s image and business climate.

The Arizona Hispanic Chamber of Commerce, which represents more than 65,000
Latino businesses across the state, condemned the bill in a letter to Brewer. “We urge you to show all Arizonans and the nation that ours is a state that encourages and supports diversity and inclusiveness and to apply your leadership to do what’s right” to sustain the state’s economic growth.

Brewer told reporters on Monday that her office had received more than 10,000 calls and e-mails about SB 1062 since it first landed on her desk. A decision is expected later this week.