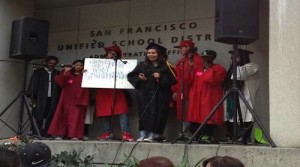 Image: Students rally in front of the SFUSD offices in support of the Safe and Supportive Schools Resolution.

SAN FRANCISCO — The Board of San Francisco Unified School District voted last week to pass the Safe and Supportive Schools Resolution, which will ban the use of “willful defiance” as a reason to suspend or expel a student in the district.

The resolution will require the use of alternatives to suspension and expulsion in cases of willful defiance, and paves the way for teachers to receive training in restorative practices and other alternative disciplinary approaches. The new policies will go into effect this fall.

“Willful defiance” refers to a vague section of the California Education Code, which allows students to be suspended or expelled for being disruptive at school or defying the authority of teachers or administrators.

One of the Board’s major aims is to reduce racial disparities in the number of students suspended or expelled for willful defiance; in particular, Latino and African American students have been disproportionately represented in defiance-related suspensions. Data show they account for 81 percent of all “willful defiance” suspensions in the district. African Americans, who account for just 10 percent of the student body, make up more than half of all such suspensions.

Among the students at a rally last Tuesday in support of the resolution was Kevin Murcia, 18, who attends Downtown High School. Murcia had been suspended for willful defiance multiple times prior to enrolling at his current school, because of behavior such as interrupting class and wearing a hat. He said that instead of being suspended, he thinks teachers could “give me a space to cool down and let me think on what I have done.”