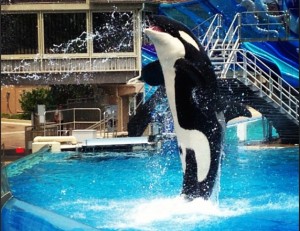 Inspired by Blackfish, a documentary which shed light on the abuse and negligence of orcas at SeaWorld, Assembly member Richard Bloom (D-Santa Monica) recently introduced Assembly Bill 2140, to put an end to orca captivity in California.

The bill, introduced on March 7, will prohibit orcas from being held in captivity for entertainment. Violators of the law would be fined up to $100,000 and face time in prison.

Assembly member Bloom’s bill is a huge step for animal rights. Since the release of the popular 2013 film Blackfish, the public discourse has broken open around the exploitation of orcas at SeaWorld, one of the biggest entertainment corporations in the nation. Blackfish explores how orcas are captured, forced to a life in captivity, and the consequences that can this practice can bring. Most animals at marine parks such as SeaWorld are kidnapped from the ocean, the rest of the animals that are not selected to go to marine parks are killed. Once at the marine parks, the animals are forced to live in captivity in very small spaces where they live a very unnatural and miserable life where they are forced to learn tricks to entertain audiences.

Not long ago on a trip to the coast, I had the opportunity to go on a whale watching tour where I saw seals, whales, dolphins and other marine animals swimming next to the boat, free. It was very fascinating to see these animals in their natural habitat. If we really want to be educated about orcas, dolphins and other marine animals, we need to watch them while they are free in the wild, not while they’re held captive in small tanks performing for people.

One thing that many people do not know about orcas in captivity is that the male ones are masturbated by the trainers to collect sperm and artificially inseminate the female orcas; this obviously affects their natural process of reproduction. When the calves are born they are separated from the mother.  This traumatizes both the mother and the calf. Most of the orcas in captivity have collapsed fins as sign of depression, and poor health, and orcas at marine parks have a shorter life span than the orcas living free in the wild.

It is important to mention that the animals are not the only ones who suffer, trainers at marine parks suffer from serious injuries and even death. SeaWorld, a multi-billion dollar company, and most marine parks (if not all), is not in the business of taking care of animals. They only care about making profit by entertaining, and supposedly educating, paying audiences.

I feel that this bill is going to pass because more than a million people have already signed an online petition in support of the bill; hopefully the numbers keep rising so that the imprisonment and torture of orcas can stop.

We must become conscious and care about these issues, because they reflect the values of our society. I hope AB 2140 passes and becomes a law so we can bring justice to the animals at SeaWorld and other marine parks, and to raise awareness about animal rights.