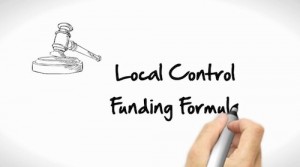 A historic change to California school funding is taking place that aims to give local school districts and parents more control over how money is spent, in a move that Governor Brown has described as one in which “schools that need more, get more.” While some districts in Kern County are rising to meet the challenge of engaging their communities in the decision making process, others are lagging behind.

“There’s a lot of flexibility and responsibility for each district to look at the needs of their students and their communities, because each one is different,” says Mary Barlow, Associate Superintendent of the Kern County Superintendent of Schools. “From district to district, each set of student needs and what parents might see is needed can be determined by districts themselves and addressed accordingly.”

Over the next 8 years, education spending in California will increase by $18 billion. According to the new school funding formula, more money will be distributed to districts with greater numbers of high-needs students, including low-income students, English language learners, and foster children. Districts receive a base amount for each student and an additional 35 percent for each high-needs student, and districts with larger numbers of these students qualify for additional grants.

With LCFF, schools have more choice in how to spend this money, and can choose how to use the additional resources in ways that help their specific student populations. School districts are now in the process of developing Local Control Accountability Plans (LCAPs), which lay out their specific plans for serving high-needs students. Districts must take community input into consideration.

In late March, South Kern Sol, New America Media, and EdSource held a media roundtable in Bakersfield where ethnic and community media met with local school administrators and community organizations to learn about LCFF and the media’s role in making sure that parents are engaged in the process.

One school district with challenges ahead is Kern High School District (KHSD). As the largest 9-12 high school district in the state of California and the third largest school district overall, its success in implementing the Local Control Funding Formula (LCFF) will serve as a bellwether for success across the state.

Some community organizations don’t think that Kern High School District is doing a good job of outreaching to the community, particularly as one of the high schools in its sprawling district, Arvin High School, primarily serves children of farmworkers. With the school board hosting last-minute meetings on LCFF in Bakersfield with little to no advertising, working parents in South Kern are presented with additional challenges to authentic engagement. KHSD did not respond to invitations to be present at the roundtable.

“Regretfully, KHSD is not doing an adequate job of seeking the input of the parents of English learners as required by the law. It does not share the information being collected at public meetings. It has not published the results of the pertinent meetings since April 2013, a violation of the Ralph Brown Open Meetings Act,” says attorney Tim McKinley of California Legal Rural Assistance.

“Parent engagement is more important than ever to understand what’s needed, what the community feels is needed, in local schools,” adds Barlow.

With regard to the crafting of the LCAPs, districts will “outline specific goals, and they will be different for each district,” she says. “The template is set by the State Board, but to determine those goals, the parents, staff and community – any stakeholder in the success of those schools – must be at the table.”

Barlow explained how some districts have excelled in this regard, holding community meetings and parent meetings that target specific groups, like parents of English language learners. This is part of what Barlow calls “authentic engagement.”

“Authentic engagement isn’t just sending a survey home with the students or sending out information to parents. What’s needed is to establish an actual dialogue,” she says. “It’s a discussion of ideas while forming plans, interpreting information, [and] collaborating to create something with parents.”

One local district that has helped define what “authentically engaged” looks like is Arvin School District. Dr. Michelle McLean, the superintendent of the district, explained some of the findings gathered in informational meetings and community events held throughout the last few months, including a recent community roundtable discussion.

“Our students were loud and clear that what they wanted was teacher quality, teachers that care,” said McLean. “Another thing is physical activities, sports, and afterschool activities, all of which we’ve had – but after years of budget cuts, they’ve been depleted.”

Parent centers have also been opened (and in some cases, reopened) at all schools sites in Arvin School District, where staff can listen to parents and help them to understand current policies and the LCFF process.