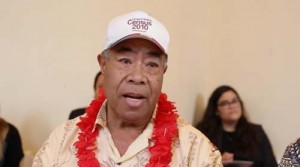 LOS ANGELES – Two days after being sworn in as a U.S. citizen, 71-year-old Tongan American Sione Vanisi smiled broadly, holding a miniature American flag and proudly showing off his citizenship certificate as reporters snapped his photo.

“I was here for 40 years and I’m glad I’m a citizen,” he told a roomful of immigrant advocates, local media representatives and other newly naturalized citizens at the Los Angeles Central Library.

“My wife always pushed me to file [my citizenship application],” said Vanisi, who moved to Hawaii in 1970. “But I didn’t want to, because I thought I’d lose my land back [home].”

When he learned that becoming a U.S. citizen did not mean renouncing his Tongan citizenship – that he could be a dual citizen – he decided to take the step.

Vanisi got his application in just in time. In May, the citizenship application, called the N-400, will become twice as long, going from 10 pages to 21 pages.

“We are trying to get immigrants to come forward now,” while the old form is still available, said Nasim Khansari, citizenship network manager of Asian Americans Advancing Justice.

But, she added, it’s important to note that while the application form itself is becoming longer, there are no other changes to the application process. “The fees are not changing and eligibility has not changed,” Khansari said.

Even after the application becomes longer in May, immigrants here will be able to continue to get free help through a network of 17 organizations that are working to make citizenship more accessible. They form part of the New Americans Campaign, a national initiative to encourage eligible Legal Permanent Residents to apply for citizenship, and are holding a series of public workshops to assist people with their applications.

Their latest citizenship workshop, organized by NALEO Educational Fund, takes place Saturday at the LA public library – which advocates say has been a key partner in the drive to make citizenship more accessible.

“What the libraries are doing in the city of Los Angeles are great models,” said Linda Lopez, director of the Office of Immigrant Affairs at the LA Mayor’s Office. “Libraries are safe spaces for a lot of immigrants, places immigrants have gone for educational opportunities.” The library’s role in bringing together immigrants and providing opportunities for them to become citizens, she said, is “a signature issue for LA that other cities are trying to model.”

But, she said, more work needs to be done.

Nationally, more than eight million immigrants have green cards and are eligible for U.S. citizenship. Yet only 8 percent of them become citizens each year.

Advocates are working to help immigrants overcome some of the barriers that may be preventing immigrants from taking that step. For example, it costs $680 to file for citizenship, but immigrants whose income falls below poverty level qualify for a fee waiver.

Those who don’t speak English well may think that limits their chances of becoming a citizen. But if they have been here for many years, they can qualify to take the exam in their native language – something that many immigrants may not be aware of.

But one of the biggest challenges is lack of information, according to Joseph Oloimooja, a Kenyan American Episcopal priest who became a U.S. citizen last September. “People don’t know the difference between being a permanent resident and being a citizen,” he said.

Unlike legal permanent residents, U.S. citizens can vote, travel freely and live free from fear of deportation. They can also petition their relatives – a key factor for families in Los Angeles, where more than 40 percent of the population is foreign born.

An estimated 1.2 million residents of Los Angeles are eligible to become citizens. That’s more than any other city in the country, except for New York.

Guadalupe Guerrero, who came here 10 years ago from Mexico, says her father lived as a permanent resident for over 20 years and never applied for citizenship. “In his mind, the process was very difficult and he didn’t see the need,” she explained.

It was his daughters that changed his mind.

“My sisters and I started encouraging him to take the step, and he did,” she said, “and through that, my sisters and I became legal residents.” Today, she says, she and her sisters all have bachelor’s degrees, and she is now a citizen.

Guerrero said young people have a critical role to play in encouraging their parents to take the step to become U.S. citizens.

“If you want true security in the United States,” said Elisa Sequeira, California director of civic engagement for NALEO Educational Fund, “security from fear of deportation, of being separated from your family, to really have roots in the United States that cannot be taken away, you have to become a U.S. citizen.”

For more information about the New Americans Campaign, go to www.newamericanscampaign.org.