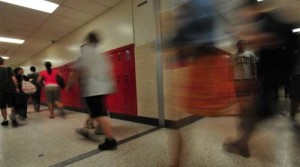 The overall suspension rate during the 2012-13 academic year at KHSD, the largest high school district in California, was more than triple the state average for K-12 public schools, at 16.3 percent compared to 5.1 percent.

And a look at individual school site data reveals major variances from campus to campus:  Of all KHSD schools, East Bakersfield High School had the highest rate of suspensions, at 39.7 percent of students. That means that roughly 4 out of 10 students were suspended at some point during the academic year.

East Bakersfield High has a student body that is roughly 80 percent Latino, with many categorized as English Learner (roughly 30 percent) and economically disadvantaged (roughly 75 percent).

“We want to understand why this is happening and how we can fix this problem from the ground up,” said Erika Brookes, Education Director at the Dolores Huerta Foundation who is concerned that the schools may now be resorting to involuntary transfers.

Community organizations and local ministries say that far too often, minority students in the Kern High School District are kicked out of the classroom and put on a school to prison pipeline. They’re ready to try something new: engaging parents.

“We are trying to let parents know and inform them of their rights so that they can get their children through high school,” said Linda Fiddler, Founder of the Kern Community Leadership Coalition. Fiddler added this is the first event they’ve held to reach out to parents.

Kayla Rodriguez of the Dolores Huerta Foundation said that the DHF wanted to advocate for student rights to ensure that local schools prepare them to compete in the workforce.

“Research has shown that a lot of students who have been suspended or expelled from schools have a lesser chance of graduating high school and a higher chance of dropping out,” said Rodriguez. “Those students are our future for Kern County.”

Manuel Ramirez from Stay Focused Ministries was promoting their “Reach 4 Greatness” program, which counsels students who have been suspended or expelled so they don’t get “discouraged and stop their education.”

“[We’re] working with students on trying to deal with the issue of being suspended or expelled, whether it is their fault or someone else’s,” said Ramirez.

Walter Williams, a Community Outreach Worker for Greater Bakersfield Legal Assistance, said that he wants parents to be empowered to stand up for their children when they leave the event.

“You can fight the school system. They have been a dictatorship for so long people are scared to say anything, they think they can’t do anything, but they can,” says Williams. “We want them to know that they can stand up and fight for their children.”

Fiddler said that the ultimate goal for the event was to connect with as many community members as possible to establish an ongoing conversation on advocating for their child’s education. This, advocates say, will help ensure all students, whether they have been disciplined or not, will receive the education they rightfully deserve.