Hispanic College Enrollment Up, But Not By Enough 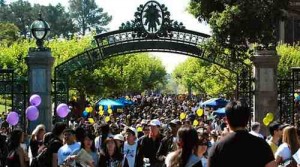 Recent data show that nationwide Hispanic/Latino and Chicano college admissions are on the rise, with Hispanic figures now outpacing white enrollment at some schools. But Hispanic education experts say the numbers are not high enough.

Patricia Gandara, research professor and co-director of The Civil Rights Project at UCLA, and and commissioner with the White House Initiative on Educational Excellence for Hispanics calls the numbers “disastrous.”

“We can’t sustain an economy this way,” she said, noting that only 11 percent of Hispanic adults in California have a bachelor’s degree. “Very soon half of the graduating class [in California] will be of Hispanic origin. If they are only getting degrees at a rate of 11 percent, we are heading in the wrong direction. It is disastrous for the community and disastrous for the state.”

Another area of concern is the fact that in states like California and Texas, completion rates for first-time, full-time Latino freshman – 15 percent and 17 percent, respectively – continue to lag behind other groups.

According to Excelencia in Education, a non-profit focusing on Latinos in higher education, for the United States to regain the top global ranking for college degree attainment, Latinos will need to earn 5.5 million more degrees by 2020.

That would go a long way toward boosting the nation’s economic and political vitality, according to one study by the Washington-based think tank Center for American Progress.

The study, which outlines the benefits enjoyed by those with at least a bachelor’s degree, shows college graduates earn more, access more opportunities, show greater rates of civic engagement and have a higher quality of life overall. The authors note that in 2006 the average annual income for a college graduate was $56,897 compared to $30,072 for a high school graduate. And that gap continues to widen for those with masters degrees versus those who hold only a bachelors.

Hans Johnson, co-director of research for the Public Policy Institute of California and author of Closing the Gap: Meeting California’s Need for College Graduates, says that California still has a long way to go. The state needs many more college graduates before it can meet labor market demands.

“When we look at Latino attainment levels we see strong progress in the first generation but that progress still leaves US-born Latinos far short of other groups in terms of college completion,” he said.

California is home to a third of the nation’s Hispanic population. As of March of this year, California Latinos now represent 39 percent of the state population, making them the single largest ethnic group in the state.