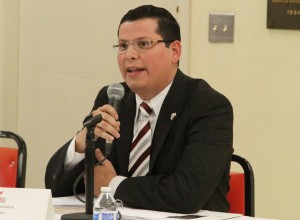 BAKERSFIELD Calif. — In anticipation of the primary election on June 3, Pedro Ríos and Romeo Agbalog, both Republican candidates for State Assembly District 32, tried to offer voters a vision for state policy that differed from incumbent Assemblymember Rudy Salas at an open forum late this past month.

Hosted by the Kern County Hispanic Chamber of Commerce, the forum gave Republican voters a chance to see Ríos and Agbalog debate the issues before they cast their votes for one of the two candidates in June. The winner of that election will take on Salas in the general election on November 4.

Former Assemblymember Nicole Parra served as moderator, and asked the three candidates about their positions on fracking, high speed rail, and the minimum wage. In all but one issue, the candidates came to a consensus on what was best for the 32nd Assembly District. That issue was raising the minimum wage.

“The income gap in California is the largest here in California, and working families have to have more purchasing power to spur the economy,” said Salas.

Salas was the only candidate that supported raising the minimum wage.

Agbalog said he opposes the raising of wages on account of struggling businesses that may not be able to afford additional payroll expenses.

“I think the discussion on minimum wage is a premature one,” said Agbalog. “We don’t have a wage issue in the valley, we have a jobs issue, and it doesn’t matter if it’s $1 an hour or $20 dollars an hour.”

The opposition from Ríos was regarding the possibility of inflation.

“Whatever you make in the extra dollar you’ll have to pay for someone else’s wage,” said Ríos. “This is why I’m opposed to raising the minimum wage.”

On the issue of fracking, or the extraction of oil or gas using high pressure water and chemicals, all three candidates agreed.

Candidates were asked if they supported the new fracking regulations law, Senate Bill 4 (Pavely). Also signed into law by the Governor this past fall, the new law requires that fracking companies disclose the chemicals that are being pumped into the ground to the public, that studies are conducted about the risks of fracking, that state agencies develop regulations for fracking, and that landowners and tenants are notified when fracking-related activities are in operation.

“If I were a legislator I would have voted against SB 4,” said Agbalog. “Regulation needs to exist but it needs to come from the local level, so local interests can decide between themselves.”

Salas, who used to work for an energy company, said that actually, some energy industry representatives helped pass SB 4, despite their public opposition to the bill. Additionally, many environmental groups withdrew their support for the bill after the amendment process weakened its regulations.

Candidates were also asked if they would support a pending bill, SB 1132 (Mitchell), which would put a moratorium on fracking until specific studies about the potential hazards were conducted.

“To my knowledge there have been no negative effects [from] fracking, and we’re sitting on rich land with oil, gas, and agriculture,” said Ríos. “If we can produce oil right here and not have to import it from other countries, I say let’s go for it,” continued Ríos. “I would oppose SB 1132.”

Agbalog would also oppose have opposed SB 1132, if he were in office.

“The state needs to reprioritize; for a fraction of the cost of high speed rail we can invest in water infrastructure,” said Agbalog.

Rios agreed that water was the priority for the district at the moment.

“If we continue in a drought for one, two, three years, we’ll become a desert, and what good will it do us to have a high speed rail if it goes through a desert,” said Ríos. “There are many unknown factors [contributing to high speed rail’s future outcomes] and that’s why there’s controversy around it.”

“I have a voting record on high speed rail, I voted against it back when I was a Bakersfield city council member,” said Salas.