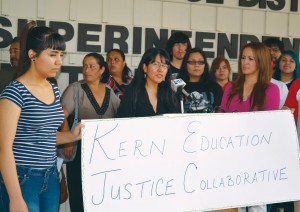 BAKERSFIELD, Calif. – Leticia Prado, whose son attends Arvin High School in Kern County, has tried to get involved in her son’s school in the past. But she says that once she started asking questions about how the school site council selection process works at Arvin High’s parent meetings, she was no longer welcome.

“I would like to see more transparency with the involvement of the parents, because I have a son who’s a graduate of Arvin High School and another in 10th grade, and I have never seen a process as to how people get to participate,” she says.

“Arvin High has a parent group, but it’s really a social group,” she says. “They won’t call you for their meetings, they won’t communicate with you. I was part of that group, but when I started to question things, I was no longer welcome, and never again did I receive an invitation.”

With a new school funding law in place known as the Local Control Funding Formula (LCFF), education spending in California will increase by $18 billion over eight years. The law gives school districts more choice in how funds are spent, and districts are expected to create their own Local Control Accountability Plans (LCAP) by July 1, which lay out how they plan to use additional funds to serve high-needs students. The law also requires districts to involve parents and the local community in their decision-making process.

KHSD has faced some criticism from parents and community organizations with regard to whether it’s doing enough to authentically engage all parents in the district, and especially the parents of high-needs students, including low-income students and English language learners.

The Kern Education Justice Collaborative, composed of several community organizations (including the Dolores Huerta Foundation, California Rural Legal Assistance, and Greater Bakersfield Legal Assistance) and local residents, decided to formulate its own LCAP by surveying the community at various events throughout Kern County earlier in the spring. The collaborative presented its recommendations to the Kern High School District Board of Trustees last week.

The collaborative’s primary recommendations to the district included creating a system of authentic parent engagement to remedy situations like that of Leticia Prado. In addition, the collaborative wants the district to work toward improving school climate by implementing disciplinary alternatives to suspensions and expulsions, which parents say have led to increased dropouts.

Juan Garcia-Moran, a father of three from the small town of Weedpatch, has seen the effects of suspension and expulsion on his son. Like many South Kern residents, Garcia-Moran came to the United States from Puebla, Mexico in the 1980s, and speaks very little English.

“They suspended my son because [of a fight in which] he did not participate. My understanding was that the suspension would be for five days,” he says. “The lady from the office at Arvin High spoke Spanish, but the document was in English, and she just told me, ‘Sign here, sign here,’ and I did, not knowing what I was signing.”

“When my son went back to school after the five-day suspension, the principal told me that I would be taking him to the continuation school on 34th Street in Bakersfield for a whole semester,” he says. His son was in the 9th grade at the time.

Since then, his son has also faced an expulsion. “We didn’t have the resources to send my son to school when he was expelled for a year, and he lost the whole year of school,” he says. His son is now in 11th grade, and is “depressed because he says that he might not graduate. He often wants to give up.”

Parents in the collaborative also want to ensure that the district uses funds to help students who are being left behind.

“I would like to see tutoring programs offered for students that are behind. I feel that they often ignore the ones who are behind and focus on the high achieving students, and push the underachievers away,” says parent Virginia Melchor. “I would like to see programs so that students can get the help they need, instead of sending them to continuation schools.”

The Kern High School District will conduct an interactive simulcast today to hear from parents on how to best use the new school funding for low-income students, English learners, and foster kids. The simulcast will originate from the KHSD’s Administrative offices at 5801 Sundale Ave., today Thursday, May 15 at 6:30 p.m. in the KHSD Board Room. Public input will also be allowed from those gathered at Foothill High, Arvin High, and North High, through the use of video cameras and microphones.