Disqualified from DACA – But Still Dreaming 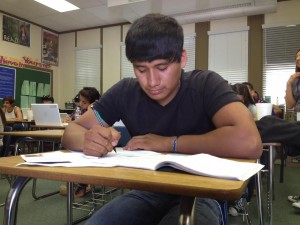 When 11-year-old Luis Ambrosio arrived in the United States from Oaxaca, Mexico, everything went as planned. Ambrosio began attending public school while his parents worked, and day-by-day, the family made a new life for themselves in the Central Valley.

But in 2012, when President Obama announced his new immigration program to help young immigrants like Ambrosio, he realized that his arrival to the US wasn’t without a hitch.

Obama’s Deferred Action for Childhood Arrivals (DACA) program, which granted youth brought to the US as minors two years of temporary legal status, only applies to children who arrived in the US before June 2007.

“I would have loved to have papers to live without fear of being deported,” said Ambrosio, who currently picks mandarins in the fields for a living. Karla Cortez of the Coalition for Humane Immigrant Rights says that not all hope is lost for Ambrosio.

“Unfortunately, Luis did not meet the requirements for DACA, but that does not mean that he should not prepare for when relief is available to him.” said Cortez. “He should look to the DACA requirements as a guide to what documents he should prepare for the time when there is a process for which he qualifies.”

Cortez said that although approximately 1.7 million people were eligible for DACA, there are still millions of residents that, like Ambrosio, fell short of the eligibility requirements.

DACA recipients must have arrived to the United States before their 16th birthday and have continuously resided in the country since June of 2007, must have been under age 31, and had no valid immigration status on June 15, 2012. The individual must be attending school, graduated
from high school, obtained a GED, or were honorably discharged from the Armed Forces.

For those immigrants who don’t qualify for DACA and are waiting for the next wave of immigration reform to apply to them, they needn’t sit on their hands, Cortez said. Keeping records organized, like those that prove how long they have lived in the country, is key.
Ambrosio, for one, won’t be idle while he waits for the Obama Administration to change immigration policy. He plans to continue his education at Taft College where he wants to get an associate’s degree in Psychology.

“I have learned that education is the most important thing; I still work in the fields sometimes, but that is why I’m going to go to college, to get a better job and wait until I can qualify for [legal documentation],” said Ambrosio, who plans to pay for tuition and books at Taft College with two scholarships he received from two local businesses.