Lessons Learned from Father’s Deadly Encounter with a Deputy 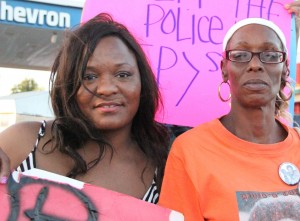 BAKERSFIELD, Calif. — Three years after former NFL player David Lee “Deacon” Turner was shot and killed by Kern County Sheriffs on July 10, family and friends gathered at the scene of the shooting at the Fastrip convenience store on the corner of Mount Vernon and Niles to memorialize his death.

“All we want is justice, because what happened to him we don’t want other people to have to go through,” said Ernestine Martin, David Turner’s sister-in-law. “To see this never happen again, to not have others go through it, that’s justice.”

Turner was reported to be leaving the Fastrip on Sunday July 10, 2011 with his 19-year-old son and his 16-year-old friend when sheriffs arrived to confront juveniles who were allegedly soliciting adults to buy them alcohol and cigarettes. The sheriffs allege Turner hit a deputy in the back of the head with a bag of two canned beers, which prompted one of the deputies, Wes Kraft, to shoot and kill Turner in defense.

“We’re not happy any time there’s an officer-involved shooting,” Kern County Sheriff Donny Youngblood told the Bakersfield Californian. “But in this case a deputy saw his beat partner being struck in the head and he fired his gun to protect him.”

The Bakersfield Californian reported that the sheriff’s review board decision that the killing was within departmental policy came only eight days after shooting. Kraft was involved in another police shooting just two months later.

Though the third anniversary of the killing still featured demands for justice and accountability, the mood of the protest was more like a family reunion, as participants shared stories of the man who had at one point held the family together.

Jerrica Cor-Dova, Turner’s eldest daughter, recounted how Turner was devoted to his family and described the effect his absence has had on those he left behind.

“He was a rock, he kept everyone together,” said Cor-Dova. “Whenever we get together we reminisce about him, and it’s hurtful, to have experienced the best love of your life, a great father, dying on a street corner.”

Doraline Hicks, who had been seeing Turner for 14 years at the time of his death, said Turner had always been fearful of the police.

“I saw a lot of the problems he had with the police, and he always told me something like this would happen,” said Hicks. “He predicted his own fate.”

Those who have survived Turner are weary of further police shootings and brutality.

“I now warn my grand-kids not to play with any toy guns, especially outdoors, because all it takes is for them is to think you have a weapon and they’ll gun you down,” said Martin.

Cor-Dova has also made an effort to change her and her family’s lifestyle, in the hope of avoiding another incident.

“I tell my sons, ‘Don’t wear red, don’t wear blue, wear high school or college t-shirts.’ I won’t even let my sons walk home because we live in a predominantly white area and I’m afraid that the police will target them, pull them over for no reason other than being black in a good neighborhood,” said Cordova. “It changed where we hang out, some family members left Bakersfield altogether after what happened.”

Her advice even extends to those outside her family.

“The other day I was at a cigarette store on White Lane and Gosford, and there was a group of kids waiting outside the cigarette stores asking adults to buy them cigarettes,” said Cor-Dova. “And when they asked me, I told them, ‘My father was at a store where kids were asking adults to buy them alcohol and cigarettes and he was killed when he wasn’t even involved in any of that, so someone can get killed because of what you’re doing,’”