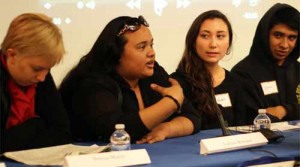 photo: Valerie Klinker (center), a NAM videographer, presents a short film as part of a panel on youth depression.On the left is Sonya Mann, and on the right are Amber Cavarlez and Robert Cervantez. (photo credit: Zoe Kaiser)

When Amber Cavarlez was in high school and her mother died of colon cancer, she and her Filipino Catholic family went to church and lit candles every day. But, she says, “After she passed, nothing was said about it. No one talked about it.”

In her home, she says, sadness was an “invisible subject.” And when she cried at school and sought help, she received an anonymous message through Facebook that said, “Don’t cry at school because no one cares.”

She learned to keep her feelings to herself, but her family’s struggles weren’t over – her brother was diagnosed with bipolar disorder and attempted suicide several times in the following years. By then attending college in San Francisco, she often found herself emotionally unable to go to class, and was told by the administration that she’d have to improve academically or drop out.

She sought the help of a therapist on campus and eventually graduated. Now 23, she is a mentor with the Peer Wellness Program at Edgewood Center for Children and Families in San Francisco. Though doing well herself, she wishes her brother had had someone to talk to when he was in school. Young people “need someone there to ask about [their feelings], to make it valid,” she says.

Cavarlez spoke with other young people at a media forum organized by New America Media in San Francisco last week on challenging stigmas around youth depression. Alongside the youth storytellers, a panel of experts in the mental health field weighed in on the views of depression across different cultures and a fractured system for delivering mental health services. They agreed that youth depression is more widespread than many people realize, and that it thrives on silence.

But both advocates and practitioners were above all optimistic about the future of mental health in children and youth, and expressed a growing excitement over treatment options – in the words of Patrick Gardner, founder of the Young Minds Advocacy Project, “We have a moment of opportunity to change some things.”

“The public is engaged in a way that I have never seen before around children’s mental health,” he said.

A fractured system, but new opportunities for treatment

Gardner says that access to mental health coverage has increased dramatically because of the Affordable Care Act, and that “we can expect these resources to continue to grow.” But, he says, “We aren’t especially effective at systems in delivering services to children.”

He points to long waiting lists for services – “Because we delay access to the system, [people] drop out,” he says – as well as the need to improve the quality of care.

And the need is high, especially in California. Gardner says that mental health problems account for 85 percent of the disease burden for people between the ages of 15 and 25.

Dr. Regan Foust, the data manager at the Lucile Packard Foundation for Children’s Health, agrees. In 2012, she said, mental diseases and disorders accounted for the largest share of hospital admissions among children under 18 in California – some 12 percent of all hospitalizations. Statistics from kidsdata.org (the program that Foust manages) show that mental health problems are the most common primary diagnosis for a hospital stay for kids under 18, more common than bronchitis or fevers.

Depression in the very young

Dr. Manpreet K. Singh, an assistant professor at Stanford School of Medicine who works in the university’s Pediatric Mood Disorders Program, stressed the importance of parents and educators being able to recognize early warning signs. “These signs can be evident even as early as infancy and early childhood, especially if the child has been exposed to family stress, chaos, conflict, or trauma,” she said.

Young children who are depressed, she says, might withdraw from activities that are normally fun for them, easily anger or become irritable, have difficulty with relationships, or be extremely sensitive to rejection or failure as compared to other kids. They also might decline academically, have headaches or stomachaches that don’t respond to treatment, or change their eating or sleeping patterns. She cautions that depression tends to run in families and can transmit from parent to child.

Like Gardner, Singh is optimistic about the future of treatment. “We now know for a fact that [depression] is treatable in children,” she said.

A 19-year-old woman who spoke on the panel was one such person who was depressed from a young age. Lena’s parents are immigrants from China. Her biological father had another family in China; he brought them to the United States when she was 6 years old and kicked Lena and her mother out of the house.

“No one would acknowledge me as family. That was very hard for me to deal with,” she said. “I really had nobody growing up … I asked, ‘Why didn’t I have a father? Why was everybody else so lucky?’ I realized I didn’t like doing things anymore. I had no interest in things.”

She went to a teacher when she was in 6th grade and asked to talk to a therapist. “I would cry through the entire session,” she said. She would often think about “What [she] was taught, how [she’s] not supposed to share anything.”

The stigma across cultures

Katherine Kam, a journalist who has reported on depression and suicide in Asian American adolescents, added that “Among parents, especially in traditional immigrant households, there’s not a lot of understanding about mental illness and about depression … Parents often rejected the diagnosis because they felt that it was a very embarrassing diagnosis. It brought shame to their families.”

Counselors who work with Asian American families told her that depression is often seen as a personal weakness or a moral failing in Asian cultures, and that if a person works hard enough he or she can overcome it.

Jeneé Darden, the host of Mental Health and Wellness Radio at P.E.E.R.S. in Oakland (Peers Envisioning and Engaging in Recovery Services), spoke of a similar experience having depression in the African American community.

“I would hear, ‘You’re not praying hard enough,’” she added. “Our first step to getting help is the pastor, is the church … [I would hear] ‘Don’t take your problems to the therapist, take them to Jesus.’”

A 20-year-old Indian American woman going by “Leela” (she didn’t want her parents to know that she had spoken publicly about her experiences) recalled having been depressed for most of her life. Her depression worsened, though, after she was sexually assaulted in college.

“My tendency is to become immobile, and I barricaded myself inside my dorm room for the rest of the year,” she said. “I did not leave. I told my parents that I was going to school but I was not.”

She says that what helped her was finding other people who feel the way she does.

Robert Cervantez, 19, said that talking about his depression doesn’t help. For him, it’s being a musician that helps him cope – it gives him “an outlet to express [his] depression and [his] anger.”

Sonya Mann, also 19, called herself “genetically unlucky” coming from a family with a strong history of mental illness. She feels lucky to have had professional medical support while she was growing up, but she continues to feel shame over her depression: “Even though I’ve been told so many times that it’s not my fault, that’s it’s not a personal weakness … I don’t believe that it’s not my fault.”

She’s had to come to terms with the fact that she will likely have to manage her depression all her life. She agrees that it’s treatable, she says, but “I don’t think it’s curable. It’s something you have that you learn how to deal with.”

New ways of thinking, and looking to the future

Rob Gitin, the co-founder and executive director of At The Crossroads, which reaches out to homeless youth, said that current trends around the way services are delivered need to change.

When kids act out in ways that are consistent with symptoms of youth depression, such as skipping school and getting into fights, “These are things that will get you kicked out programs,” he said. “You’re not doing what you’re told to, you’re being violent, you’re not engaging with services.” In their search for evidence-based results, programs end up shutting out the kids who need help the most, because those kids don’t live up to strict expectations.

And, he says, the outlook of many service providers needs to change.

“There is no model on how you help people,” he adds. “How you help people is you listen to them, you get to know them as an individual. You learn what’s great about them and what’s awful about them, and you help them accept whoever they are and help them figure out who they want to be.”

Ziomara Ochoa, LMFT, is the supervisor of the South County Youth Team at Behavioral Health and Recovery Services in San Mateo. She primarily provides services to a Latino population, many of whom are immigrants or undocumented. Her work, she says, is moving from a focus on treatment into the realm of prevention, with programs like Mental Health First Aid, a public education program that educates participants about risk factors and warning signs of mental health problems and teaches them how to help a person in crisis.

The hope is that by educating the community through platforms like forums and group discussions, depression and mental illness in young people can be prevented through community awareness.

It’s part a movement, she says, to “integrate community-based practices that really work with our community and really validate [them] just as much as evidence-based practices.”

Kordnie Lee, a Youth Mental Health First Aid instructor with Lincoln Child Center in Alameda County, added “It’s really about giving a common language … if a young person is doing something that you don’t understand or exhibiting symptoms that you don’t understand, that you [don’t] just send them to someone else and that person’s going to figure it out. It is a community, it is a holistic responsibility that all of us have.”

Visit newamericamedia.org/feelbetter to hear stories from other young people. Journalists can use kidsdata.org to access population health and demographic data on California children, youth, and families, including data on emotional and mental health.

The forum was supported by the Lucile Packard Foundation for Children’s Health. It is part of a larger initiative by New America Media and our statewide network of youth-produced community media hubs to use storytellers and our ethnic media partners to break the stigma about depression and promote greater awareness of treatment options, including Medi-Cal enrollment. This work is supported by The California Endowment, The California Wellness Foundation, the Zellerbach Family Foundation, The Atlantic Philanthropies, and The van Loben Sels/RembeRock Foundation.