Ferguson Through the Eyes of a Reporter Who Covered the L.A. Riots 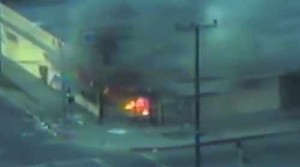 Watching the television news footage of the riots in Ferguson, Mo., I remembered a unique assignment I worked more than 30 years ago, but will never forget.

The screaming protestors. The heavily armed police. The burning buildings.

The Ferguson unrest started after the killing of unarmed black teenager Michael Brown by a police officer. But it was all too similar to what I experienced in 1992, when I covered the Los Angeles Riots as a cub reporter for the Bakersfield Californian.

Violence erupted in the city after the acquittal of the police officers that beat motorist Rodney King in an incident that was captured on videotape and seen by millions. As King was on the ground, officers hit him more than 50 times.

I worked for a daily newspaper in a city about 100 miles north of Los Angeles. I asked to go to the riots because that’s the kind of thing you do when you’re a young reporter.

So on April 30, staff photographer Henry Barrios and I drove to South Central Los Angeles not knowing quite what to expect. Before then, my concept of a riot came mostly from 1960s newsreels of helmeted cops facing angry college students.

Those images seemed tame compared to the Los Angeles Riots. People looted. Buildings burned to the ground. The military roamed neighborhoods like they were war zones.

There was no order. There were no rules. And every second, you felt like you might be swallowed by the chaos.

My tattered notebook from those days includes a quote that I didn’t use for some reason. As the butt of his M-16 rested against his knee, a National Guardsman guarding a shopping center said, “We’re here to bring it back to civilization.”

That wouldn’t happen for a while.

Before Barrios and I got there, one reporter had been yanked from a phone booth and beaten. Trucker Reginald Denny was almost killed by gang members at Florence and Normandie avenues. In a savage coup de grace, a rioter bashed Denny’s skull with a cinderblock, causing severe brain damage.

So where did we go first? Florence and Normandie.

It was the heart of South Central Los Angeles, but the closer we got, the more it felt like we weren’t even in America. Cars screeched to a halt in the middle of the street, and people jumped out to shatter store windows and grab the merchandise inside. People took whatever was there. Some stole televisions and videocassette recorders, but others swiped cases of beer and baby formula.

At one point, I saw a young man point to the gas can in his hand and taunt firefighters. Another time, in the Korean neighborhood at night, we heard gun shots and somebody said looters broke into a gun store.

I was once asked at a journalism workshop whether I was scared. I was terrified. It was a constant surge of adrenaline that pumped through your limbs and made it hard not to run for a safer area.

The solution? Ignore the yelling, sirens, and alarms and keep working.

But there were moments of grace, too. As convoys of cops, guardsmen and firefighters roared from street to street, the voice of Marvin Gaye floated from a nearby window.

I left my job as a print reporter more than 15 years ago for a job in the public-school system. Although I’ve thought about it over the years, I can’t offer any deep philosophical reflections about what I saw in Los Angeles.

But I know this: It’s easier than we think to drop the smiling mask of civilization and glimpse the snarl underneath.

That’s what I saw in Los Angeles in 1992. That’s what happened in Ferguson.

Leonel Martínez is an occasional contributor to the South Kern Sol and can be reached at columnista1@gmail.com.