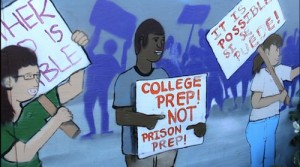 If there is one group of students with the most to gain from staying in school, it is those minors transitioning out of the juvenile justice system. Yet of the roughly 42,000 youth who attend California’s juvenile court schools each year, only 20 percent successfully reenroll within 30 days of their release from the system.

That success rate, say experts, has little to do with the kids themselves and everything to do with a systems failure rooted in poor coordination and a lack of communication between key county agencies – primarily juvenile probation and county education departments — responsible for shepherding youth in detention back into the public school system.

A possible remedy exists in AB 2276 (Bocanegra), a new California bill that, if approved, would require county agencies to immediately enroll all students exiting juvenile court schools, which include juvenile halls, day centers, ranches, camps and other county facilities serving youth in detention. The bill, which passed through the state legislature unopposed, is currently pending approval by Governor Jerry Brown.

In high school, Tanisha Denard struggled to get herself to class on time. Her walks from home to John C. Fremont High School in South Central Los Angeles were long, the buses were crowded and when there was space, Denard rarely had the fare. “I got passed by the bus a lot and I didn’t have money,” she recalls.

The truancy tickets piled up – Los Angeles municipal code allows schools to issue citations of up to $250 to tardy and absent students – and so Denard, now 20, whose family was unable to cover the cost, paid her debt by serving time at a county juvenile hall. When she was released, school officials informed her that reenrolling at her old public high school wasn’t an option — she would need to begin the much lengthier process of finding a new school and getting herself enrolled.

Although Denard was eventually able to navigate her way into another school, she is by far the exception. The story of young people leaving the juvenile justice system with no clear academic transition plan is a familiar one to youth advocates, despite existing laws that are meant to avoid such scenarios.

“They’re supposed to be coordinating – there are laws that talk about coordination and communication – but that’s not happening the way it needs to happen,” says Laura Faer, Education Rights Director with Public Counsel, a pro-bono law firm.

What makes AB 2276 different from current laws, says Faer, is the requirement that juvenile probation and county education departments work together to form transition policies in collaboration with local education agencies. In addition, the bill would create a statewide stakeholder group headed by the Superintendent of Public Instruction and Board of State Community Corrections that would study best practices and be required to report back to the state legislature.

Faer has seen plenty of past instances where court school records are not transferred from probation officials to the county office of education immediately upon a child’s release, which in turn creates a negative outcome for the student.

“A student shows up at the school and the school says, ‘you don’t have any of your documents, so you can’t come.’ Or worse, even if they are allowed to go to school, [the schools] don’t know anything about them,” says Faer. “A child [may have] already taken algebra when they were in the hall or in the camp, then they’re put in the exact same classes. Then they get disaffected and they drop out, because they keep getting shuffled and doing the same things over and over again. So that handoff, that transition, is really critical.”

Ironically, poor coordination between government agencies can have a direct bearing on whether a young person winds up back in juvenile hall: most counties require youth to enroll in school within a specific time period after being released, or risk violating the terms of their probation.

“When I got out, I had five days,” recalls Denard, who had to quickly compile numerous academic records, find a welcoming school, and haggle with her probation officer for an extension. “When you go back and forth, it takes a lot of time. People are out of school for months sometimes.”

Part of the hope with AB 2276 is that improved communication between agencies will expedite student records and academic credit transfers from the court schools to local district schools.

Currently, says Kim McGill, an organizer with the Youth Justice Coalition in Los Angeles, youth too often feel pressured by their probation status to enroll at any school they can, simply to avoid the risk of being re-incarcerated. Still, without a coordinated system supporting them, most are unsuccessful.

“Young people come home without real linkages to programs on the outside,” said McGill. “Young people are kind of dumped onto the streets.”

Part of the challenge, says Denard, is finding a school to accept you after you’ve been stigmatized as a juvenile delinquent, even though schools legally are not allowed to bar students because of prior contact with the juvenile justice system. “A lot of times you get out from juvenile hall, and they look at you like a criminal, [and] they’re not likely to send you to a school where you’re likely to be successful,” adds Denard. “You go to an adult school where you won’t get you’re A through G (college) requirements.”

Luckily for Denard, she found the Youth Justice Coalition’s FREE L.A. High School, a college-prep program for justice-involved youth. She now is poised to attend Antioch University in the fall and plans to study Criminal Justice.

Two-thirds of incarcerated youth aspire to attain higher education, according to the office of Assemblymember Raul Bocanegra, who authored AB 2276. Still, youth who have been incarcerated are much less likely to graduate high school, and more likely to be re-incarcerated as adults, according to a 2013 National Bureau of Economic Research (NBER) study.

A strong buffer to incarceration in general, research has shown, is access to higher education and jobs, yet advocates like McGill argue that the juvenile detention and education systems have been slow to recognize the opportunity inherent in reengaging this population of students.

“School is the most essential thing to keep youth out of juvenile hall or future contact with the prison system,” says McGill. Yet, she adds, justice system youth “face all kinds of illegal discrimination from school districts that want to bar them because of their record, often times for things that are very minor.”

More than three quarters of youth detentions nationwide in 2011 were for non-violent offenses, according to the Easy Access to the Census of Juveniles in Residential Placement.

Although AB 2276 passed through the legislature without opposition, there would be implementation costs if approved by the governor. Formation of the statewide stakeholder group would carry an estimated cost to the state of $100,000.

Advocates say the bill could save money in the long term — a recent study using U.S. Census Bureau and Vera Institute of Justice data has shown that over time it is more affordable for the state to educate juveniles than incarcerate them.

Roughly 130,000 juveniles are detained in the United States each year, with about 70,000 incarcerated on any given day. California detains more juveniles than any other state, according to the most recent Census Bureau data.

Support for this story was provided by The Equity Reporting Project: Restoring the Promise of Education, which was developed by Renaissance Journalism with funding from the Ford Foundation.​