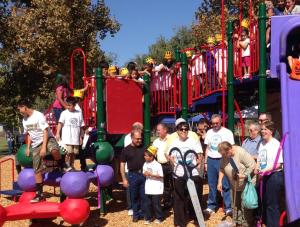 LAMONT, Calif. — Over a hundred community members gathered at Lamont Park on October 4 for a ribbon-cutting ceremony celebrating the park’s new playground. The renovations also included a wheelchair ramp and wood chips in place of sand for improved safety and wheelchair access. The host of the event, Kern County 5th District Supervisor Leticia Perez, said the renovations were made in response to concerns she heard from the community.

“We’ve been meeting with residents here at the library and what we’ve been hearing time and time again is that the park has been taken over by a criminal element; older men who come and play poker, drink beer, and make the environment uninviting for families,” she said. “Parks should be places where families and children feel safe, places you can even send your kid from across the street to play at the park.”

According to Perez, private donors, as well as a grant from Kaboom!, a national organization that creates play spaces to address the “play deficit” among children, made the recent renovations possible. She also announced the receipt of a $200,000 grant for further improvements: lighting and a walkway.

“The criminal element likes privacy and darkness. Lighting and an inviting environment for families will drive them out,” said Perez.

Maria Elena Saldaña, a local resident, is a mother of two. She said she hadn’t used the park in the past because of apprehensions with the “criminal element”. However, she said she now sees the renovations as an incentive to go more often.

“I don’t come to the park, but with the new playground, it looks like I might be coming more often. My daughter is enjoying it,” said Saldaña as she motioned in the direction of the new playground. “But you often get men at the park who come and drink, behave crudely, and they gather in herds. I don’t like coming for that reason.”

The county hasn’t been able to adequately enforce the ordinance, according to Perez, due to a lack of resources. The City of Lamont has no police department and instead relies on the Kern County Sheriff’s Department for law enforcement services.

“Enforcement on those things is really hard because we don’t have the resources to patrol the area every day, and we’re never going to have that,” said Perez. “So we have to think creatively about how to make this the best space for families so that the criminal element is discouraged from being here.”

In addition to the renovations, Zumba classes will also be offered at the park on the basketball courts on Wednesdays and Fridays starting at 6 pm.

Alma Rosa Torres, a regular park-goer, said she is pleased to see the changes.

“I like going for walks while my kids play,” said Torres. “The renovations are great. The new equipment gives kids more to do. The wood chips are better and cleaner than the sand it used to have. And just having an event like this makes the park look better.”

Part of the celebration included a Zumba dance activity led by the Greenfield Walking Group. About forty children participated.

“This is the family’s and children’s park and it’s about time we took it back,” said Perez.