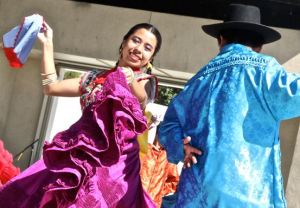 BAKERSFIELD, Calif. — Earlier this week the Seattle School Board voted unanimously to replace Christopher Columbus Day with Indigenous People’s Day, a move that hopes to give indigenous people a restored prominence in the community. Such a prominence has grown and developed for almost 15 years here in Kern County, with the Guelaguetza, a celebration of Oaxacan indigenous culture.

Organized by Unidad Popular Benito Juarez, a coalition of organizations amplifying indigenous Mexican voices, the Guelaguetza aims to build a community for people marginalized both here in the US and in Mexico. While the 2010 Census found that 1,831 individuals in Kern County self-identified as indigenous, Hector Hernandez, Unidad Popular Benito Juarez’ Executive Director, estimates that approximately 8,000 to 10,000 indigenous individuals from Oaxaca reside in Kern County. About 3,500 people attended Sunday’s Guelaguetza event at Cal. State Bakersfield’s amphitheater the largest event yet.

“We are very thankful to everyone who made this event as successful as it was, our community, the volunteers, the dancers, and all of the media outlets who helped us promote this event,” said Hernandez.

The Guelaguetza tells the story of the contact between European Christianity and indigenous peoples through food, dance and music. Before colonization, Guelaguetza was the event in which the various indigenous nations came together to honor of the goddess Centeotl, goddess of maize, which after colonization was forced to change to la virgen del Carmen.

Since its start in 2001, the Kern County festival has grown in size and in diversity and plays a strong part in showcasing the heritage of the indigenous people of Mexico for the local community.

“We started in 2001, 2002 but it was put together by a group of us who are Mixtec,” said Hernandez. “Over time as we grew, different indigenous groups wanted to participate, so it became a Guelaguetza.”

Part of the aim of Guelagetza is retention of cultural memory and pride in one’s heritage, a process Hernandez undertook when trying to build his own community.

“Before I became more conscious and historically aware, I used to refer to myself as ‘hispanic’, but once I learned what it refers to and that it doesn’t refer to me, I don’t use it anymore,” said Hernandez. “There’s a legacy of colonization forced onto me…the Spanish language, is supposed to make us ‘hispanic’ but it just isn’t that way… indigeneity lives on.”

Language also became a point of contention at the most recent organizing meeting for Guelagetza. The issue was which language should be used first in giving the welcome that would kick off the event. Despite some internal resistance, organizers eventually decided that indigenous languages would be placed front and center.

“Language is how make sense of things, it has power, and for an indigenous event, about indigenous culture, we need to use indigenous languages,” said Hernandez, adding, “It’s all very foreign to a lot of people, just the word [Guelagetza] can be hard for people to hear and pronounce.”

According to Hernandez, when Unidad Popular Benito Juarez presented their plan for the Guelaguetza to department heads at CSUB, they were reluctant to support it.

“They were taken aback that we used the name of Benito Juarez, because they said he was a rebel…that he was a problematic figure,” recounted Hernandez.

Benito Juarez, whose name is used by UPBJ due to his indigenous Zapotec origins, was a liberal reformist president of Mexico. According to the State Department’s Office of the Historian, Juarez did resist French emperor Louis Napoleon’s occupation of Mexico, but was not a highly controversial figure. The U.S supported his regime.

Nevertheless, CSUB’s initial uneasiness with associating with Unidad Popular Benito Juarez “smoothed out” in subsequent years, according to Hernandez.

He said today, the Guelaguetza aims to preserve history and culture for future generations, and to take pride in the legacy of indigenous people.

“The youth today prefer to adapt to current customs and completely forget their pasts, to go trick or treating instead of building an altar to the dead, or cooking mole with the family- that is culture,” said Hernandez. “In Mexico they used to compose calaveritas, poems and lyrics to denounce political injustices, to talk about your history and yourself, but now it’s about commercialism or consumption of themed movies… we have to study and analyze our histories and reclaim what’s been lost.”