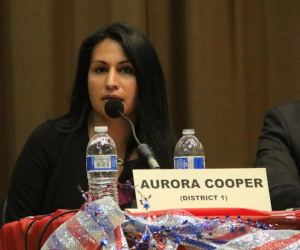 BAKERSFIELD — As the 2014 General Election approaches, one of the more interesting local contests is shaping up to be the race for Kern High School District Board of Trustees, where three young candidates are challenging older, more experienced incumbents.

The two candidates that were on hand, Aurora Cooper and Anna Laven, had ample time to make their argument for change on the board.

In Area 1, Cooper, 35, is challenging incumbent Mike Williams, 56, a business owner who has held office since 2010.

Cooper is a human resources director for a Kern County nonprofit organization that works with under-served populations.

She said one of the reasons she decided to run for office was the high expulsion rate in the district.

“Students have to be kept in classrooms where they can succeed,” said Cooper, adding that if she were in office she would conduct an investigation to discover how the district decides to expel students.

Expulsion isn’t the only problem Cooper has found with school discipline in the district.

“I’ve met parents whose students were involuntarily transferred to different schools but didn’t know what was going on,” she added.

Laven, 37, is challenging incumbent member Martha Miller, 65. The two candidates, both educators, are vying for the Area 4 seat. 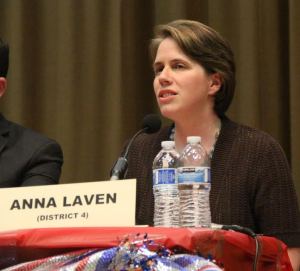 According to Laven, stronger leadership from administrators is needed. She said leadership is key to reducing expulsion rates in the district as well as focusing on “all students.”

“We have to focus on the success of all students, and the first step is to keep them in school,” began Laven. “One thing we can do to address expulsion is stronger leadership from the board, with a real focus on keeping kids on schools and keep the success of all children in mind.”

With a doctorate degree in Educational Leadership from the University of California, Los Angeles, Laven’s candidacy promises to, “keep our students in school, expand job training programs, prepare our students for college,” and “promote technology in the classroom.”

Miller has touted her experience on the board in her appeal to voters, and she recently won an endorsement from the Bakersfield Californian.  The newspaper has also endorsed incumbent Mike Williams.

On the question of language accessibility for parents who speak languages other than English, there was unanimous support among the candidates to make school meetings and functions as accessible as possible for all parents and students.

Advocates at the forum said that the district often fails to send out notices to parents in both Spanish and English.

Laven said she wants to make schools “welcoming” to all and Cooper cited her own struggles growing up needing to translate for her mother to get through school functions.

Jose Gonzalez of Bakersfield was one of the forum’s attendees. He has four children attending schools throughout Bakersfield City School District. Gonzalez said he would vote for Cooper because she is bilingual, but not without reservations.

“I think she better understands us and the issues we face, but as she’s said, she’s not politically experienced,” he said. “She’s not a politician, so if she does go to the board, is she just being thrown into a lion’s den?”

Esther Cervantes, another attendee, has grandchildren in Kern County high schools. Her impression of the candidates focused on the issue of teen pregnancy.

“I heard a lot of great issues, particularly the one about teen pregnancy,” said Cervantez. “There needs to be more attention placed on young women by teachers, by parents, their families, they need support and education more than others.”

The event also featured incumbent State Assemblymember Rudy Salas. Despite the fact that his opponent in the race for 32nd Assembly District, Pedro Ríos, declined to attend, Salas answered questions that would have been directed at both candidates, including some barbed questions from the audience in reference to some of his campaign’s ads directed at his opponent.