Record Number of Latinos to Serve in House 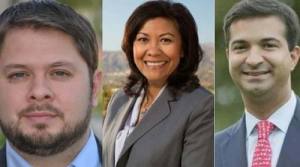 Pictured above: (From left to right) Ruben Gallego, Norma Torres and Carlos Curbelo are among the five new Latinos who will serve in the U.S. House of Representatives starting in January. (Campaign photos)

A record-setting 29 Latinos will take seats in the U.S. House of Representatives following the results of this year’s midterm elections, according to the National Association of Latino Elected and Appointed Officials (NALEO).

When the 114th Congress convenes in January, five new Latinos will serve in the House and two Latinos — Joe Garcia (D-Fla.) and Pete Gallego (D-Texas) — will not return after losing their re-election bids.

The 29 Latino House members will join the three current Latino U.S. Senators — Marco Rubio (R-Fla.),
Bob Menendez (D-N.J.) and Ted Cruz (R-Texas) — who were not up for re-election this year. That’ll bring the total number of Latinos serving in both chambers of Congress to a record of 32.

Among the new Latino House members is Ruben Gallego, a former state legislator and Iraq War veteran. He will fill the seat being vacated by retiring Rep. Ed Pastor (D-Ariz.) in Arizona’s 7th congressional district.

Carlos Curbelo, a Republican of Cuban descent, is also among the new Latino House members. He defeated Garcia in a highly competitive race for Florida’s 26th congressional district.

And in West Virginia, Alex Mooney made history by becoming the first Latino elected to Congress in the state’s history. He will represent West Virginia’s 2nd congressional district.

Arturo Vargas, executive director of the NALEO Educational Fund, said in a statement that Latinos will now form “the largest congressional class of Latinos in history.” He also said that in addition to the gains made in Congress, Latino candidates also secured “groundbreaking victories” in other races across the country.

According to NALEO, Bush and Gorbea are among the 12 Latinos who will serve in statewide executive office following Tuesday’s midterm elections, an increase of two. David Garcia, who ran for superintendent of public instruction in Arizona, could be another Latino elected to statewide office, but that race is still too close to call.