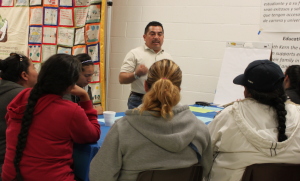 LAMONT, Calif. – Close to a hundred South Kern residents gathered at the David Head Center in Lamont on Nov. 20 for Building Healthy Community’s ‘central table’, a meeting held every three months to gather public input on community health issues. Residents were bused in from Greenfield, Arvin and Weedpatch for the meeting to outline the community’s priorities for the coming year. Among the most popular issues discussed were recreation and the environment.

The coalition is currently in the process of creating a new action plan for the next five years, and will be using the input from community members to guide their work in the coming year as well as to gauge what’s worked in the past.

“People were most concerned about enforcement of existing codes and laws; they feel they’re not being followed,” said Cesar Campos, director of the California Environmental Justice Network. “Their goal is to have safe drinking water.”

Another attendee, Hilda Garza, is concerned about environmental health. As a bus driver with the Lamont School District, she sees the need for additional pavement at school bus pick up and drop off points for the health and hygiene of the students she serves.

“My concern is having children stand where they load onto the bus,” began Garza. “They’re standing in loose dirt that kicks up when buses pull up, and that’s a problem because of valley fever… when I open the door to let them in the dust will fly in and cause breathing problems for children already on the bus.”

“I did see they put a black[top] path to Mountain View School so kids can walk on the path and it’s good for the kids so they don’t walk too close to the highway or in the dirt,” Garza added.

Recreation was another popular topic, with residents weighing in on the need to continue promoting healthier lifestyles. Esther Stenger of Greenfield praised the changes that had taken place in her community’s parks.

“I’ve really enjoyed the increase in family activities at the park,” said Stenger. “We’ve improved Stiern Park, Rexland Park. My friend is now doing dance classes and moms are attending them with their kids to exercise.”

Stenger attributes this to the community’s push for safer and renovated public spaces.

“The people who used to hang around and do drugs are clearing out [of Rexland], just as they did when we worked on Stiern Park,” said Stenger. “It’s been years since Stiern’s had problems but in the past year Rexland has seen an enormous improvement and we’re very happy with the changes.”
In the coming year, Stenger hopes to improve another ailing park.

“The next one is Greenfield Park. We’re going to fix it up so families can go and exercise, so children can play, so their moms can get together for dance classes… this is our goal for the next year,” said Stenger.

Stenger said that in the last year she has observed a growing awareness of health among community members.

“A very important thing I’ve noticed is people taking greater notice of their health as we talk more about things like heart disease and diabetes,” said Stenger. “There have been more and more people taking note and making changes.”

Building Healthy Communities-South Kern is a community initiative comprised of over 1,200 residents, youth, business and organizations to make positive change in the communities of Arvin, Lamont, Weedpatch, and the unincorporated areas of Southeast Bakersfield.