Napolitano: What is the Priority for Public Higher Education in CA? 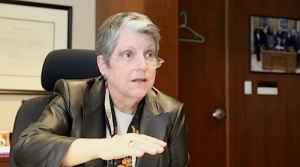 Ed. Note: In November, the University of California Board of Regents approved a plan to raise tuition for all students by 5 percent each year over the next five years. The move touched off heated reactions among students and state legislators, and has even led to a proposal by Senator Ricardo Lara (D-Bell Gardens) that if passed would give Sacramento greater oversight powers over the UC, including the ability to veto any tuition increases approved by the Board of Regents. But UC President Janet Napolitano says that after years of disinvestment by the state, the issue at hand is really about “what it takes to run the kind of public university system that California has historically had and what it will take in the future.” She spoke with NAM editor Peter Schurmann.

Gov. Jerry Brown will be announcing a draft budget for 2015 in January. What are you hoping to see?

The governor and I have spoken at length since the Regents’ meeting and the discussions have been not only about money, but really the value of the university and what goes into an education at the university. I think there is a bigger picture here…. What is the priority in California for public higher education?

The state is now putting forward plans to either avoid or offset a tuition hike. What’s your sense of how that will play out?

The hike is a contingency. The timing is important because we are required to submit a budget to Sacramento by Dec. 1. My recommendation – and the Regents approved it – was to be very transparent and honest about what the university really needs. Also to think longer term. Not just year to year, but in five-year swaths so we can do better planning and so families can do better planning. We are really looking at making sure the university maintains openness, accessibility and excellence, and that we have a plan for that over the long term.

[The tuition hike] is contingent in the sense that the state can appropriate enough money to essentially buy out a tuition increase for California residents. This has happened in the past. That’s what will obviously be negotiated, and I am encouraged that the Assembly and the Senate are considering different ways to accomplish that.

There has actually been talk of the state stepping in and taking over for the Regents because of political opposition to the tuition hike.

Well, there is a proposal, but it would require a constitutional amendment, so two-thirds of each house would have to approve it, which is a lot. But this is not an issue about governance. This is about what it takes to run the kind of public university system that California has historically had and what it will take in the future.

You’ve spoken frequently about the impact of cuts in state funding for higher education. Is it a question of priorities or simply dollars and cents?

California has done what other states around the country have done, unfortunately, and that is to disinvest from higher education, because in their heart of hearts they know that tuition can always go up and so other needs take precedence. And so the university becomes the last rung on the ladder so to speak.

I think by being very open and honest about what the financial needs of the university are, we have raised public awareness of the issues. I am encouraged that Sacramento already seems to be looking at this with some fresh eyes. There may be some philosophical issues involved here and if so, we need to have a discussion about those, because I believe this is the strongest public university system in the world. But we need to fight to keep it that way, and that’s for the next generation of Californians. This is not about the past. This is about the next generation.

What are some of the strategies being explored right now to either avoid a hike in fees or keep them at a minimum?

There is a proposal by Senate President [Kevin] De Leon to put more money in for specific purposes. The Speaker of the Assembly has, I think, been considering what to do with the pension. Unlike the California State University system, [Sacramento] does not put money into the pension system for the UC. We bear all that cost ourselves.

If there is a hike, who do you see it impacting most?

I am very concerned about the middle class. Fifty-five percent of our [in-state] students will not see this hike. They don’t pay any tuition. And then you have those from upper income families, and they can afford the tuition. But there is a middle group there that I have my eye on, to make sure the doors of the university are open for them as well, and they don’t graduate with lots of debt.

If the [recently created] Middle Class Scholarship stays the way it’s currently positioned, a whole additional cohort of our students will have the increase in tuition pretty much covered. The De Leon bill that I referenced … one of the places where he finds money is to reduce or eliminate that scholarship program. Whether that ends up being what happens is too early to say.

Nationally, enrollment in higher education has been in decline. Are you concerned that a tuition hike could exacerbate this trend for the University of California?

This is where the UC is not following the national trend. Demand for the UC continues to go up. Last week we released the application numbers for this year. [They were] almost 6 percent above last year, which was a record year.

We would like to increase enrollment. One of the things the tuition increase would allow us to do is to add over the next few years 5,000 additional California undergrads because the demand is going up in all groups, particularly Latino students.

What would you tell those protesting the tuition hikes?

The protests happen at every tuition increase. But this is a time for that energy to be focused on our governmental institutions. This is in large part the outgrowth of a long period of leaving the university at the bottom of a priority list when it comes to public funding.

A New York Times poll found that more Americans feel the American dream is unattainable. Do you see a connection to what is happening in higher education?

The economic recovery has not been experienced equally. Too many people feel stuck. They’re not moving up, and they don’t see their kids moving up. And that’s the American dream.

I think in California we have a separate dream: The California dream. We have the opportunity to be different than the rest of the nation. And I think we pivot that difference off the fact that we have these great universities, and great state schools and great community colleges. But they can’t be great in name only. It takes substance under that. I think for a long time now we’ve been hiding behind reputation as opposed to what really matters, which is public support.

You’re committed to UC’s role as the premiere research institute in California. Where do you see some of the breakthroughs?

We have so much research going on throughout the university, in all different areas. One that I am particularly interested in is developing a health care system for the prison inmate population. We have more inmates in California than any other state. It’s an aging population and they all live in close proximity to one another so lots of health issues arise. No one has focused on that particular population from a health care perspective.   Another one looks at the neuroscience around how the brain receives and interacts with music. This is not a music appreciation thing; it’s about the structures of the brain itself, [the understanding of which] will ultimately lead to better diagnostic and treatment protocols for all the neurologic diseases, such as Parkinson’s and Alzheimer’s. I’m excited about all these projects.