Indigenous Leaders Call for Driving Test in Their Own Language 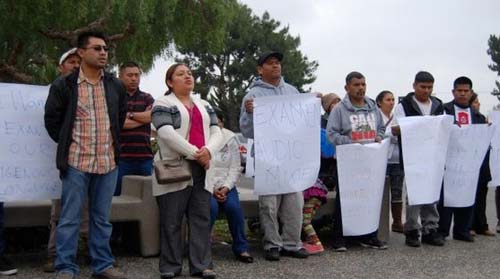 Leaders of the Mixtec community of Oxnard, Calif. are asking the Department of Motor Vehicles to offer the written driving test in indigenous languages so they can get licenses under California’s AB60. The law, which went into effect in January, allows Californians to apply for a driver’s license regardless of their immigration status. But indigenous Mexicans fear that the language barrier could stand in their way.

“We want people to be able to take the written exam with audio in Mixtec and other indigenous languages,” said Arcenio J. Lopez, director of the Mixteco/Indigenous Community Organizing Project (MICOP).

Otherwise, he said, even if people do their best, they will fail the written test because they are monolingual in their native language.

“Some people feel hopeless because they don’t know how to read or write, either in Spanish or English; some say they are going to try it, and others are questioning whether they should do it,” he said. “DMV employees in Oxnard have said they should learn English, but that could take time,” he explained.

He recalled that at a meeting in September, they had understood that the audio exam would be available in Mixtec and Triqui.

According to a 2010 study of indigenous farmworkers, rural California is home to at least 165,000 indigenous Mexican immigrants, of which about 120,000 are farmworkers. An estimated 80 percent of farmworkers in strawberry fields are Mixtec speakers.

For farmworkers, getting a driver’s license under AB60 is crucial because they depend on private vehicles to get to fields in remote areas that aren’t accessible by bus.

“The Mexican indigenous community should have the same rights as other communities to be able to take the exam in their own language,” said Juvenal Solano, a community organizer with MICOP. The exams will be offered in an audio format in 15 languages, including Hmong, Punjabi and Armenian. “We want this opportunity for those who speak Mixtec, Triqui and other languages.”