At Long Last, Romero Named a Martyr by Pope Francis 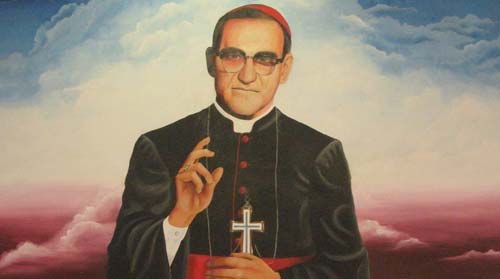 The people of El Salvador have long held that their beloved Mons. Óscar Romero was not only a martyr but already a saint — if only unofficially so. Now Pope Francis, the first Latin American pope, has made the first of those designations official, and with his declaration, cleared the way for the second to become a possibility.

The Archbishop of San Salvador who spoke out against poverty and social injustice in his native country during its bloody civil war in the 1970s and ’80s (he famously read out the names of ordinary Salvadorans tortured, disappeared and killed extrajudicially by the military regime in his weekly radio broadcasts and enjoined soldiers to stop following orders in killing innocent civilians), was assassinated in 1980 as he was celebrating Mass.

Even though the late Pope John Paul II (himself a saint) named Romero a Servant of God, and Pope Benedict XVI declared that he merited beatification, the extreme conservatives in the Catholic Church have long rallied against the possibility. They are still railing (especially conservative U.S. Catholics) despite the unequivocal papal imprimateur and the undimmed love and devotion expressed by the people for the archbishop who ministered to them.

It is no coincidence that a Latin American pope finally named Romero a martyr. It is impossible for European Catholics, or those from the United States, to understand the entrenched racial, social and economic injustices of that time in much of Latin America, nor understand how priests, women religious and catechists were targeted as radical for simply voicing Catholic teaching about poverty and compassion.

But for Latin Americans there is no disconnect. He is revered by la gente far beyond the borders of his Central American nation: in 1984 Panamanian singer Rubén Blades wrote the song “El padre Antonio y el monaguillo Andrés,” as a fictionalized retelling of Romero’s ministry and assassination; in 1989 the late, great Puerto Rican actor Raúl Julia portrayed him in the Paulist Pictures production “Romero” that grossed $1,316,495 in the United States; and numerous Catholic ministry centers (like this one in Camden) bear his name and further his mission to give voice to the voiceless.

If ultra-conservative Catholics have had a hard time seeing beyond their own politics to understand Romero’s assassination as a martyrdom, Anglicans have not. Romero was included in the frieze of 20th century martyrs that was installed above the Great West Door of Westminster Abbey in 1998.

“When we struggle for human rights, for freedom, for dignity, when we feel that it is a ministry of the Church to concern itself for those who are hungry, for those who have no schools, for those who are deprived, we are not departing from God’s promise. He comes to free us from sin, and the Church knows that sin’s consequences are all such injustices and abuses. The Church knows it is saving the world when it undertakes to speak also of such things.”
— Archbishop Óscar Arnulfo Romero