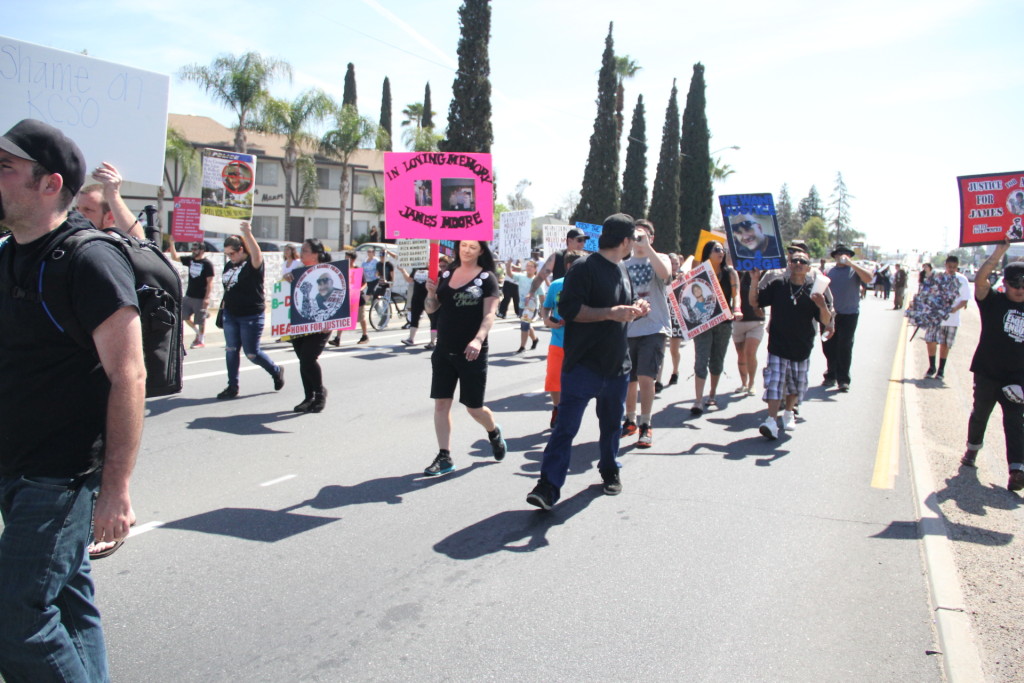 BAKERSFIELD, Calif. – On a Saturday afternoon in March over 200 protesters gathered in East Bakersfield along Mt. Vernon and Flower streets in East Bakersfield. The streets connect the sites where four men were killed in recent years in fatal encounters with police.

The significance of the location is not lost on those gathered, many of them relatives of the slain men.

“I’ve got one that says, ‘My uncle was shot by police officers,’ who does this apply to?” one organizer asked the crowd as it assembled around a pile of signs before the march began. “Who’s lost an uncle and wants this sign?”

After collecting their signs, the group – numbering in the hundreds – marched along the 2.4 mile-long route along which David Silva, David Turner, James de la Rosa, and Ronnie Ledesma all died at the hands of local law enforcement.

For the past few years now, families around this Central Valley city have been gathering for regular rallies such as this one – sometimes ending in barbecue picnics – to put a spotlight on the issue of police violence in the community.

“We keep hearing that not all cops are bad, but where are the good ones stepping up for justice, breaking the silence,” said Joe Arambulo, 34. He is the brother of James Villegas, who went by the name James de la Rosa. In November, de la Rosa was killed by Bakersfield Police Department after a high speed chase that ended on Mt. Vernon Street. He was unarmed at the time.

The department alleged that de la Rosa, who had no prior record, had approached them aggressively.

“Those [officers] who speak out are fired or punished,’” said de la Rosa’s sister Sarina Gonzalez, 29. “But why, for doing the right thing, the humane thing?”

Both agree that more training for officers in handling situations such as these is needed, but they and others say the problem runs deeper.

“It’s beyond a training issue,” said Chris Silva, 33, the brother of David Sal Silva, who in 2013 was beaten to death by nine police officers responding to reports of an intoxicated man outside Kern Medical Center. “David was right across the street from a hospital [when he was killed], he needed medical services, assistance, not a beatdown.”

The beating was captured on camera by witnesses who said they heard Silva, 33, pleading for his life. Silva was a father of four. A federal investigation later found no evidence of wrongdoing in the case, ruling Silva’s death the result of heart disease. The decision was based on documents produced by the Kern County Sheriff’s office during an internal investigation.

Silva says collusion within branches of law enforcement make getting at the truth that much more difficult.

“The coroner works with the sheriff, [and] like the DA, she’s not going to work against someone she works with everyday,” he said.

John Money is a retired sergeant with the Kern County Sheriff. He says local law enforcement does receive adequate training, and that instances such as those involving Silva or de la Rosa are often the result of “split second decisions.”

No officer, he says, goes into work thinking, “I’m going to shoot someone today.”

Silva offers a different take. “They say they do what they have to [in order] to go home at night … [but] if you’re that afraid, you shouldn’t be in this job.”

Organizers say they plan to continue with the rallies, though Silva acknowledges it’s a heavy lift. Given the conservative bent of Bakersfield, he says many tend to see law enforcement in a positive light. Racial and socio-economic differences also widen the gulf.

Despite the challenge, Gonzales said the loss of loved ones at the hands of police motivates them to continue their struggle.

“I don’t want other families to feel what we do, to struggle every day like we do,” she said. “We want to get people involved and aware …we want to wake the community up.”

Silva organizes in other parts of California. He wants to tell his brother’s story.

“I have been all over California in the past 2 years attempting to understand police brutality in other cities as well as to tell David’s story,” said Silva. ““Many of these [local] families meet sometimes every week to protest, but, myself, we meet whenever a planned rally happens, usually every month or every other month.”

With the anniversary of Silva’s death approaching, his brother remains hopeful for an event they have planned to commemorate his passing and the struggle that has ensued.

“There have been a handful of major rallies since my brother died,” said Silva. “The next rally I am planning is the 2 year anniversary rally of David’s death, May 8th, which I hope reaches our biggest turnout.”

Silva hopes to bridge the divides between the community and speak out against the fear and tension that has befallen communities, and hope for greater success than this month’s demonstration.

“Families of David Silva, Ronnie Ledesma, David Turner, Jorge Ramierz, James Moore, James De La Rosa, and many more unite as much as possible to bring attention to what’s happening here in Bakersfield,” said Silva. “I hope that May 8th reaches the thousands.”