Napolitano to Gov. Brown — ‘What Went Down Must Come Up’ 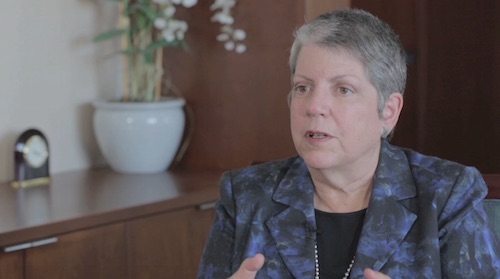 New America Media, Video, Peter Schurmann
Ed. Note: UC President Janet Napolitano is locked is a battle with California Gov. Jerry Brown and the state legislature over restoring funding to the University cut during the recession. In an interview with NAM Editor Peter Schurmann, Napolitano says the stakes are much higher than a budget tussle. They go to the heart of what role California and the nation sees for public higher education. High school students are getting acceptance and rejection letters as we speak. What’s the current picture with enrollment at the UC’s?Applications came in higher this year than last year. It’s a record number, and it was a record number last year…demand is very, very high. But our budget is in such flux right now because of issues around what the state will reinvest, (and) what will happen with tuition, that we’re having to put a few more students on the wait list than we otherwise would prefer. We will manage those waitlists, and we really hope they will be reduced in size as we go through the year.In the last three years more than 30,000 qualified UC applicants were turned away from the campus of their choice. Are there barriers to access?

There is an unmet need in California that I don’t think has been fully appreciated. In the UC system (eligible) students are still offered a seat but perhaps not at the campus of their first or second choice. (But) the chancellor of the CSU system says they turned away over 20,000 eligible students just last year, and they’re on pace to do the same this year…We need to talk about access and what California’s current college-age and future college-age generation needs.

You have been meeting with Gov. Brown to make the case for increased funding. What is your elevator pitch?

You remember that old song? “What goes up must come down.” My view is that what went down must come up…The amount of funds we get from the state today is the same amount we got in 1997, and we’ve added 83,000 more students, which is like adding three UC Riversides…The amount we’re getting from the state per student is a lot lower than it was then.

So what we’re facing is a budget crisis?

I think state budgets are about priorities and what comes first. ..Our budget was cut by a third from the state in just one or two years. That’s a huge cut to absorb, and it’s only now come back a little less than half way from when the cuts were made. If we go at the rate proposed by Sacramento…I’m not sure we would ever catch up, much less expand what the budgets were prior to the recession. .

The majority of students graduating from California high schools today are students of color. Is this an equity issue?

For me it’s a question of opportunity. If young people are doing the work, and getting themselves eligible and academically qualified to come to the University of California, I want them to not only be able to be admitted but get the best public university education in the world.

Media attention has focused mostly on public protests over the proposed tuition increases with far less public debate about state funding cut backs. Why is that?

I don’t know. If we could solve that riddle I would be so happy. The data is absolutely clear that tuition goes up when state appropriations go down…Tuition has been held flat for three years, and what we’ve proposed is no more than a five percent increase…not the great big double-digit spikes we’ve seen in the past. We want to keep it as low and predictable as we can.

A new bill is proposing to cap administrative salaries at the UC’s. Would that make up for reductions in state funding?

No. We have relatively few personnel at the upper reaches who are paid only out of core funds from the state…If you added all that paid together it wouldn’t touch the core budget of the university and what it means in terms of faculty…classes, class size, courses…the ability to graduate in close to four years. Those are the things that really drive cost.

What’s your long-term goal in this battle over state funding?

What we want do do is reengage the state of California in its public universities and its public higher education mission.

We’re getting further and further away from the original concept of public universities, which is that they would be as nearly free as possible. And we’re doing that, and having to do that because where once states invested enough to cover the operational cost of the university, they are moving further and further away from that model, leaving universities either to cut their own expenses, which we continue to look at and do, or having to look at tuition.

How do you see the college experience for this generation of Californians?

College is about learning things, mastering certain competencies. But it’s also about growing up, maturing, learning how to live on your own, forming friendships with your peers that last a lifetime. College is not only a job placement training experience. Students today in all likelihood are going to have 10 or 12 different jobs in a lifetime. …You can’t monetize these things directly but they certainly have value. And it’s that value I hope we don’t lose sight of for this next generation.