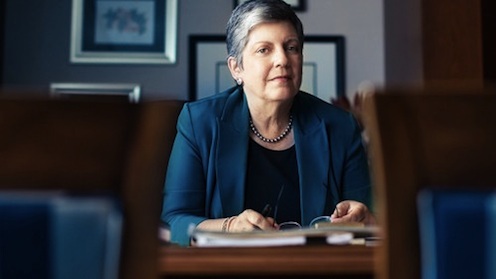 One of occasional series of NAM interviews with UC President Janet Napolitano.

NAM: More students of color are graduating from California high schools than ever before who want to go to college. That’s good news. Is UC able to accommodate the demand?

Napolitano: We’re seeing increasing numbers of California high school students graduating…and they’re increasingly diverse. The fastest growing are Latinos, but we’re also seeing growth in applications from Asian Americans – Filipinos, Chinese, Vietnamese and others. More and more students are taking the required courses so they’re eligible and they’re applying. We want to enroll as many of these students as we can.

NAM: What are you asking the state to do?

Napolitano: We have a plan that would enable us to meet the demand. We’ve asked the legislature to increase state funding by $50 million this year and $50 million next year to expand in-state student enrollment by 10,000 students over the next four years.

NAM: What’s your read on what the legislature will do?

Napolitano: Sacramento has realized that higher education has to be a priority. I’m sympathetic to the legislators because they have so many conflicting demands.Nonetheless when you look at the prison budget and compare it to higher education, that needs to change. The legislators have the opportunity to expand enrollment to the best university in the world.

NAM: There’s some concern that students who do get accepted don’t get their first choice of campuses…They want to go to UC-Berkeley or UCLA but they are assigned to Merced.

Napolitano: The schools in the UC system are at different levels of maturation. The student experience at Merced is exceptional because it’s the newest campus and a smaller student body. Students who attend are pioneers, building the kind of legacy that the older campuses already have. The number one major at Merced is biology – so it’s drawing large numbers of students who want to pursue STEM (science, technology, engineering, math).

NAM: UC is the premiere institution training the future educated class in California. What are you seeing that encourages you and what worries you?

NAM: Is UC actively involved in trying to address these disparities?

Napolitano: We’re actively reaching out to communities across the state. There are so many families that think they can’t afford UC. We’re letting them know that we offer substantial financial aid…We’re also doing a lot with community colleges., We have identified community colleges that aren’t sending many students to UC campuses and we’re looking to expand that effort.

NAM: Many middle class parents feel their children won’t get into the UC—they’re not poor enough to get scholarships and they’re not rich enough to afford it.

Napolitano: Housing costs are a key factor since a number of our campuses are located in very affluent areas like La Jolla and Santa Cruz. We’re looking to build more housing dorm units. We’re also actively looking at ways to ensure students don’t graduate with debts, although I always remind students that getting a diploma with debt is very different than buying a new car with debt. With the diploma the value only increases, whereas the car loses value the minute you drive it out of the dealership.

NAM: More women are now enrolled in college than men. Are you seeing an emerging gender gap in UC admissions, with women on the ascendance and does that worry you?

Napolitano: That’s an important question. I want to look into that.

Napolitano: Foreign students, out of state students, enrich the entire college experience. UC is very much a global university.
I like to say that we teach for California, we research for the world.

NAM: CP Snow’s Two Cultures 70 years ago warned against an imbalance between science and the humanities in our culture. Today, we are witnessing technology in the ascendance, and the humanities feeling very threatened. What’s UC doing to address this?

Napolitano: One of our goals has to be to produce well educated people. There’s no question that students graduating with a computer engineering degree will earn more money
than the student with a degree in English. But there’s more to life than how much money someone makes.

NAM: What’s your greatest source of satisfaction after two years as UC president?

Napolitano: Furthering the mission of educating today’s students. I’ve done a lot of things in my life, and this is the most satisfying.