After SCOTUS Marriage Equality Ruling, LGBTQA Fight Far From Over 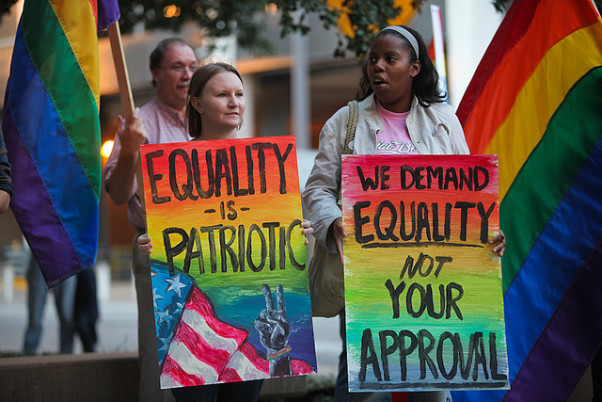 Ed Note: Jacqueline Hernandez is a 22 year old resident of South Merced. A member of the LGBTQA community and student at Merced College, Hernandez describes herself as an ‘intersectional feminist.’ She works to advocate locally around issues, like healthcare and youth engagement, that connect with her identity as a queer Chicana.

In the following opinion editorial, Hernandez shares why after the SCOTUS rule on marriage equality, there is still much work to do around LGBTQA issues. .

On Friday June 26, 2015, the Supreme Court ruled marriage legal for all LGBTQA Americans, in all states, regardless of sexual orientation. Although California granted everyone the right to marry almost two years ago, this was truly a big step in the right direction for our country. But the the fight for a just society for all is far from over.

My struggle includes gay marriage, but it goes way beyond that. Because of my appearance and identity,  I’ve felt many different forms of discrimination for being who I am that had nothing to do with the topic of marriage.

Growing up and attending schools in south Merced, I grew up thinking my community was brown, black, and Asian. As I became older, I realized that wasn’t the case at all. Though my neighborhood was certainly made up primarily of people of color, the power structures in Merced are comprised of a mostly white conservative community. There are still people flying confederate flags loud and proud in parts of Merced. There are people who think queer folks live in sin and try to preach bible verses to them. There are police officers who profile of people of color in certain sides of town. Street harassment against women of all ages and gender identities is common. This is my community, and these forms of discrimination affect me whether they happen to me or someone else.

These issues aren’t just relegated to my community in South Merced, or more broadly to the Central Valley. There are huge gaps in the safety, educational attainment, health, and financial stability between white heterosexual and LGBTQA Americans, especially those of color. While I’m excited that the right to legally marry has been extended to all, large gaps exist for families headed by same sex couples–married or not. On average these households make 20 percent less than those headed by heterosexual couples.

LGBTQA people on average experience higher rates of discrimination in hiring, firing, wages, and in their workplaces, and are not protected by any comprehensive laws or policies. One possible legal protection, the Employment Non-Discrimination Act, was proposed over 20 years ago but has yet to garner enough support in Congress to become law.

As a queer person of color, I know that day to day, my body is in danger in a way that most straight white folks don’t experience. This fear is shared with many in my community: a 2013 study found that LGBTQA youth of color are almost twice as likely to experience violence than white LGBTQA youth.
My celebration of the Supreme Court decision comes with the knowledge that the new law is not a cure-all. I’m happy that America has recognized that everyone deserves to be with person they love without limitations, but I will not stop pushing for full equity in my community. This fight is far from over.  My fight will end when I can travel to any part of this country and not fear for my safety and wellbeing because I happen to be a queer Chicana.