The Dinner Table: The Classroom On Privilege and Racism for White Families Across America 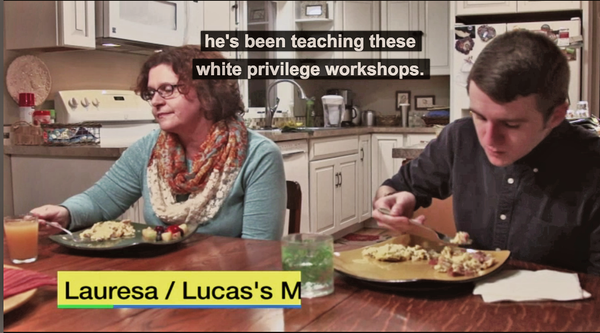 Last week MTV premiered Jose Antonio Vargas’ show, “White People” exploring white people and white privilege across America. The dinner table was an ongoing theme: a Washington family speaking with their son about his white privilege workshop for the first time, an Italian family in Brooklyn, friends sharing spaghetti meeting their black friends for the first time. Writer Andrew Bigelow weighs in on why it is at the dinner table that the conversations of learning and discomfort must happen with families like his across America.

Last Thanksgiving, we had almost 30 people over at my parents’ house. About 10 of us were sitting at the table after dinner. The Mike Brown case entered the conversation. News had broken out a few days before that the officer Darren Wilson would not be indicted for the Ferguson, Missouri murder of the unarmed 17 year old. My aunt decided to state her opinion on the matter.

She said what had happened was awful and I thought she genuinely felt that no one should have died. Then she went on to say something like:

“But he shouldn’t have stolen from the liquor store.”

At this point, the room fell silent. My oldest brother, James, spoke up. He said something along the lines of, “But that doesn’t mean he deserved to die.” The argument began. Throughout the conversation, my aunt used the same rhetoric one could find on CNN or even Fox News. She gave reasons like:

“But he shouldn’t have been a bully to the store clerk.”

“But he shouldn’t have attacked the police officer.”

“But he was a criminal.”

“Where was his family to guide him down the right path?”

At this point, my aunt’s white privilege and unconscious racism surfaced. Everyone at the table was faced with the choice to let it go or confront it. We confronted it. Specifically my brother James and myself. Voices were raised, the energy in the house was uncomfortable and it eventually became a battle for my aunt to prove that she was in the right. For my aunt, being right meant that she would not have to deal with the implications of her comments.

At dinner tables across the country, white communities are faced with the decision to let the racist comments by their loved ones go or to confront them. It is there, at the dinner table, that we, white communities, need to hold ourselves accountable to our privilege, our racial bias, and the implications of our comments. It is our responsibility to hold ourselves accountable for what we do, what we say and how we think. No one else’s.

Back at the Thanksgiving dinner table, it was our responsibility to hold our aunt accountable for what she was saying. We didn’t speak up for our ego or to isolate her. We spoke up because we love her. I spoke up because I don’t want my family to be on the wrong side of history — an uncomfortable fact that continues to repeat itself in white communities.

In confronting my aunt’s statements, we kept reiterating what was underneath those statements. When she emphasized young Mike Brown stealing from the store, what she was really doing was looking for a justification for his death. All of her reasoning was trying to explain why this unarmed 17-year-old was shot dead by the Ferguson police officer. She was unable to accept that racism, specifically institutionalized racism, was the reason or even part of the reason why Mike Brown was murdered. For my aunt to accept this truth, she would have to have a larger conversation about the system we live in that perpetuates racism and how all of us at the table participate in it — a hard conversation to have with any white person and still an uncomfortable topic in my family.

Furthermore, her reasoning reflected the news outlets that she watches and some of her “facts” were just not true. By coming up with every reason why Mike Brown was killed besides racism among police, she was not acknowledging that experience. This is her privilege: she was unable to accept or acknowledge that racism among police is a lived experience by communities of color, most likely because she has never experienced it.

Few from the white community identify as racist. But our world view can be tainted by never understanding or accepting that racism (especially institutionalized racism) exists. Even harder is getting white people to accept or even acknowledge that we benefit from the system that perpetuates racism. To say this, especially to my loved ones, is to hurt their feelings because this somehow translates to them as me saying they are bad people — an assumption that is not the case.

But I understand. Being white, I have had my own long and hard process of wrestling with the topic of race in America. I have been defensive, I have had my feelings hurt, I have been uncomfortable and frustrated. I have been blinded by my own privilege. And in no way am I saying that I have “figured it out” or I am the “white guy that gets it” because that is far from the truth. This is a never-ending learning experience. It is humbling to say, “Racism exists in America. Being white, I benefit from this. I do not know what it is to experience racism in America and I never will. I can only listen and attempt to understand to my best ability.”

At some point, every white person in America will be faced with their white privilege and will be forced to address it. It is a constant process. For myself, I am blessed to deal with it in my early 20s. For my aunt, it was her mid 60s. There is no right or wrong in this, only in what we do after we become aware of it.

The table after dinner was uncomfortable. The air was filled with tension. There was a sense that my aunt felt we had all teamed up on her. Conversation continued in another direction. My aunt and her family got ready to leave. My brother diffused it by telling my aunt he loved her. We all hugged and said goodbyes. They left. Soon after, I remember my brother turning to me and asking if he had been in the wrong. I said, “No, the conversation needed to be had.” We reassured each other that what had happened was needed and it was all of our responsibilities to speak up. Lives are being taken and people are being murdered, so how much of a burden is it really to confront our aunt’s privilege? In fact, it was the least we could do. The tension at the table, the frustration we all felt is nothing compared to what the victims’ families must be going through.

To be honest, I don’t see my aunt much. I think I have seen her once or twice since that night and we haven’t spoken about this conversation. I don’t really know the impact it had on her. Maybe she doesn’t think twice of it or maybe it impacted the way she looks at the world. I pray the latter. I truly believe that not shying away from these conversations has had a deep impact on our immediate family and has encouraged all of us to be intentional and accountable. For myself, what was most important that night is that we stepped up in the moment and had the conversation. We didn’t shy away from it in fear of ruining the family gathering or hurting anyone’s feelings. What was important is that we weren’t silent.

In case after case, people of color are being murdered at the hands of police. Protests break out, media report the news, social media trends, action is taken and white households will talk about it. It is inside these homes, at the dinner table, that history is repeated or made. In order to break the cycle of white silence and white consent, white communities need to hold themselves accountable and stand against the systemic racism of this country, and in solidarity with those who are affected by it.

That’s a tall order, especially given the fragility of the white perspective to never want to face their own prejudices or admit they’re wrong when it comes to race in America. I encourage white communities to hold themselves accountable and be open to understanding.

The discomfort at the dinner table is nothing compared to being afraid of police because of your complexion. Let’s remember that before we choose to be silent.

Andrew Bigelow is a Hip Hop artist as well as a writer and organizer with SiliconValley De-Bug. Follow him on social media at @HeIsAndrewBigs