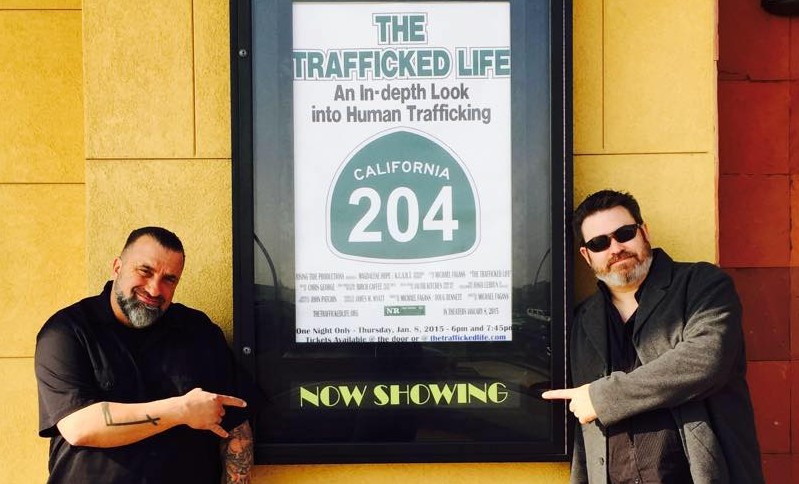 Photo above courtesy of Michael Fagans: Doug Bennett (left) and Michael Fagans (right) outside Maya Cinemas on the day of the debut.

Ed. Note: A recent documentary explores the issue of human trafficking in the Central Valley. “The Trafficked Life,” co-produced by Bakersfield photographer and filmmaker Michael Fagans, tells the story of three young women from Bakersfield caught up in trafficking. Fagans, who is the director of strategic communications for the United Way of Kern County, calls Bakersfield a “central hub” for traffickers across the state. He spoke with South Kern Sol reporter Randy Villegas.

What inspired you to make this documentary?

One of the main reasons I wanted to make this film was to raise awareness in our community. This issue cuts across race. It doesn’t discriminate, and people of all ethnicities are being trafficked. But let me clarify, this [film] is not just about sex trafficking. Sex trafficking tends to get the most attention, however one major issue is labor trafficking, which makes up about half of all human trafficking. People that you see selling roses or balloons during holidays can be labor trafficked. People selling magazines door to door can be labor trafficked. Trafficking victims face threats that their families will be hurt, or that they will even be reported to ICE.

What are some common myths you hear about human trafficking?

One is that there is no labor trafficking in Kern County … Bakersfield can almost be seen as a central hub or traveling point where people are trafficked. With Las Vegas to the east, Los Angeles and Sand Diego to the south, and San Francisco up north, traffickers are coming through here from many directions. Another myth is that the women who are involved in sex trafficking are out there by choice. The numbers put out by Magdalen Hope [which works to support victims of sex trafficking in and around Bakersfield] indicate that about 75 percent are not there by choice. Another thing I really want to stress is that the majority of people being trafficked are Americans, and they are being trafficking by other Americans. It’s not the Taiwanese, or the Chinese, or the Mexicans, as many people like to assume.

Most people assume sex trafficking only involves women. Have you come across any cases of underage boys or men being trafficked?

Yes, both teenage boys and girls are trafficked from early ages. Most of the women we interviewed in the film began to be trafficked while they were underage.  One woman was as young as 12 when her father took her to be sex trafficked. One problem we run into with [male victims] is that they often aren’t willing to talk about what happened to them. There are streets out there where people who know what they are looking for will go. But a lot of the boys and men [working those streets] won’t talk about it. There’s a real stigma attached to it.

Why should people go see your film?

It’s not my film. It’s the survivors’ stories. The women’s stories. It’s the power of them telling you what happened to them, and how they got out of that. I had one woman [we interviewed] come up to me and say, “Your film saved my life.” She’s turned her whole life around. She’s graduating as a dental assistant, and is even striving to be doctor.

What can we do to combat trafficking in our own community?

If you see or know someone who is being trafficked, call the national hotline. They will alert either the sheriff’s department or Bakersfield PD. Recently we had a BPD officer identify a woman as being trafficked, and he bought her breakfast and stayed with her until KCAT showed up to provide her transportation to a safe house.

You can also educate yourself, and other people who care about this. You can make a difference by simply asking if someone is okay, or if they need help. If you see someone you suspect might be being trafficked ask, “Are you alright? Is everything okay?” Help other people care. We need to educate people.

What is the Tour Against Trafficking and how can people get involved?

It’s a 750-mile charity bicycle ride across the Central Valley from Bakersfield to Modesto to end trafficking. You can get more information, contribute to the event or sign up to volunteer at the event website: http://www.touragainsttrafficking.org. We’re going to need people in Taft, Bakersfield, and Ridgecrest. People can donate money to back me as a rider, the tour as a whole, and other riders. One hundred percent of the money donated to the tour goes to organizations working in the valley to combat trafficking, including Magdalene Hope and KCAT (Kern Coalition Against Trafficking).

The Trafficked Life will be screened on September 19th at St Paul’s Church in downtown Bakersfield.