Community Groups Press for Health For All 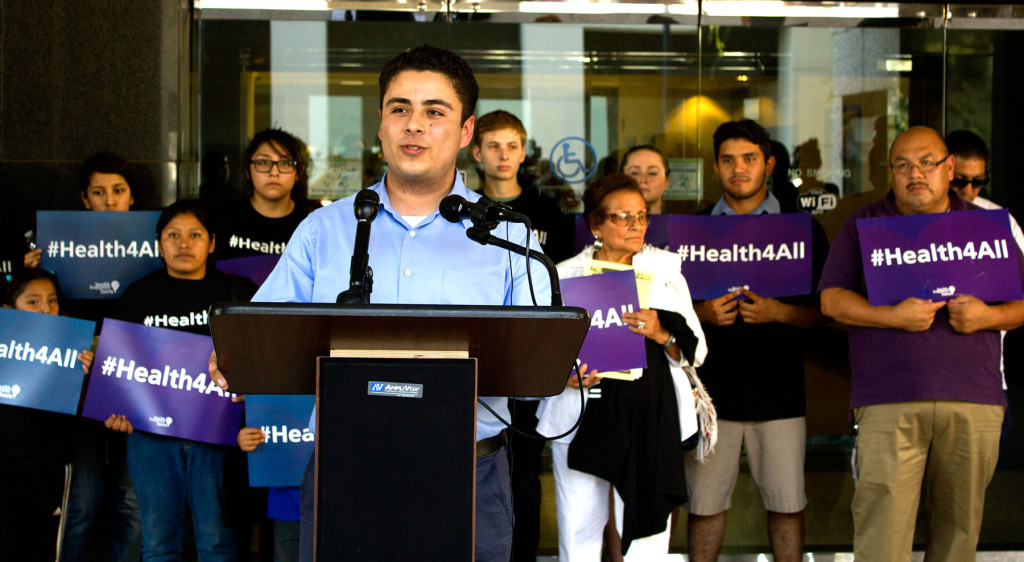 A coalition of immigrant rights proponents rallied at the Kern County Board of Supervisors meeting on August 17 to demand that undocumented immigrants in their community be given access to health care.

Before the Board of Supervisors held a public meeting to hear public comment on the 2015-16 fiscal budget, community activists with the #HEALTH4ALL campaign held a press conference at the entrance of the Kern County Administrative Center, urging lawmakers to extend health care rights to immigrants. The campaign is to support two bills sponsored by Sen. Ricardo Lara, D-Bell Gardens  — SB 4 and SB 10 – both of which will provide all California residents with access to health care, regardless of their immigration status. The bills are currently making their way through the legislature.

“Health care for all, regardless of immigration status, is morally the right thing to do, and is fiscally responsible governance,” said Arvin Mayor Pro-Tem Jose Gurrola. He said he was speaking as a private citizen and not as a representative of the Arvin City Council. “Health and disease (do) not discriminate.”

Speaker after speaker pointed out that by providing everyone access to health care, uninsured people could avoid expensive emergency room visits.

“Because of a broken immigration system and a lack of leadership at the federal level, we have millions of people in this country and thousands in this county who are living under the shadows without access to primary and preventive care,” Gurrola said, noting that it costs taxpayers more money in the long run.

Lack of access to preventive care could potentially lead to a public health crisis, said Bill Phelps, chief of programs at Clinica Sierra Vista. He said that by not providing immigrants access to immunizations it could lead to a countywide outbreak of influenza, measles or other epidemics.

While the Affordable Care Act grants California citizens access to preventive coverage through Medi-Cal or Covered California, the online health care exchange, Phelps said that the program’s major shortcoming is in failing to address the needs of undocumented immigrants.

“There are still many left outside of the Affordable Care Act who also need and deserve the opportunity to obtain affordable coverage,” Phelps said. “[Immigrants] are contributing to our local, state and national economy, and maintaining a healthy workforce is vital to our nation’s interests.”

Several #HEALTH4ALL supporters also spoke when the Board of Supervisors opened their meeting for public comments.

Marisol Alcantar told the Board of Supervisors about her inability to find a doctor who could perform vital surgery she needs to survive.

“It was very important that the Board hear our stories because many of us need medicine,” Alcantar said in Spanish through an interpreter. “At this moment, there’s no way to receive the care that I need.”

South Kern resident Maggie Vazquez said she had watched her migrant parents deal with the everyday obstacles of life as an undocumented farm worker in the Central Valley.

“They worked day in and day out in the fields, trying to provide food and a lifestyle for their family,” Vazquez said. “It’s so unfair to see them struggle with finding basic access to health care.”

So far, the #HEALTH4ALL campaign has successfully fought to get $40 million set aside in the state budget to provide health care for undocumented children, said Josth Stenner of the California Partnership, an organization that connects grassroots organizers with representatives of state and local legislatures.

Only 37 percent of an estimated 68,000 undocumented immigrants in Kern county currently have access to healthcare coverage through their employers, Stenner said.