With AB60 No More ‘Driving in Fear’ 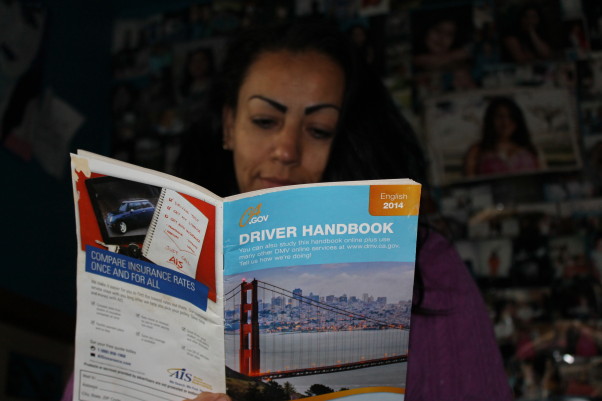 My aunt Maria says that for as long as she can remember, the sight of a police car has intimidated her. For years she worried that she would be stopped while driving around Patterson, where she lives, and that she would get in trouble for not having a driver’s license.

That all changed in January when California enacted AB60, also known as the Safe and Responsible Driver Act. The law allows undocumented immigrants in California to receive driver’s licenses.

I was excited to hear about the new law, because although I am eligible to apply for a license through DACA (Deferred Action for Childhood Arrivals), there are many others like my aunt Maria who did not qualify for DACA and were therefore denied licenses.

“Not only do I feel a little more confident driving the streets, but I also have a form of acceptable identification,” my aunt explained.

Since January 2, the California Department of Motor Vehicles has issued 381,000 new licenses under AB60 and has received 640,000 applications. A recent report from the Merced Sun Star noted that about 9,000 residents in Merced County would qualify for a driver’s license under the new law.

But applying for a license and actually getting one can be two different things.

For my mother, passing the driver’s test was more difficult than she thought it would be. She has driven for years, but since getting a license was out of the question she never had to learn the actual rules in the DMV driver’s handbook.

“I expected to go into the DMV and pass the test on the first try, since I have been driving for many years, but I didn’t,” she said, adding that with AB60 undocumented drivers like her will now learn rules of the road that they may not have known before.

Still, not everyone is a supporter.

I see the backlash against AB60 reflected in remarks on Facebook, for example. And while I was not surprised to see those kinds of remarks on social media, I was very surprised to hear them at school.

One day in my government class, as we were discussing various laws in the process of being passed in California, a classmate brought up AB60. This classmate questioned why undocumented immigrants should receive benefits that, according to him, they don’t deserve.

To my surprise, our teacher agreed, and jokingly said that it would be easier to gather up “people like that” and deport them back to their countries of origin.

I was shocked to hear her words. I felt uncomfortable because I’m undocumented and so is my family. I wondered, “Is that what she thinks of me?”

I felt the urge to speak up, to let them know that licenses acquired under AB60 have a specific section that says the bearer of the license is not entitled to any benefit other than the right to operate a vehicle.

But at the same time I felt intimidated, because I would be speaking up against an authority figure that I am supposed to respect.

I understand there are different perspectives and viewpoints on issues like immigration. But granting undocumented immigrants the right to hold a driver’s license does not take anything away from other Californians.

In my own experience, having a license gives me the ability to do simple things others take for granted, like open up a bank account, buy a lottery ticket or watch an R-rated movie.

Undocumented immigrants are not given any legal status or residency included with their new license. It simply offers us an opportunity to live by the rules like everybody else and not drive in fear, and for that my family and I are thankful.