‘Free Our Dreams’ Youth Leaders Gather at the Capitol 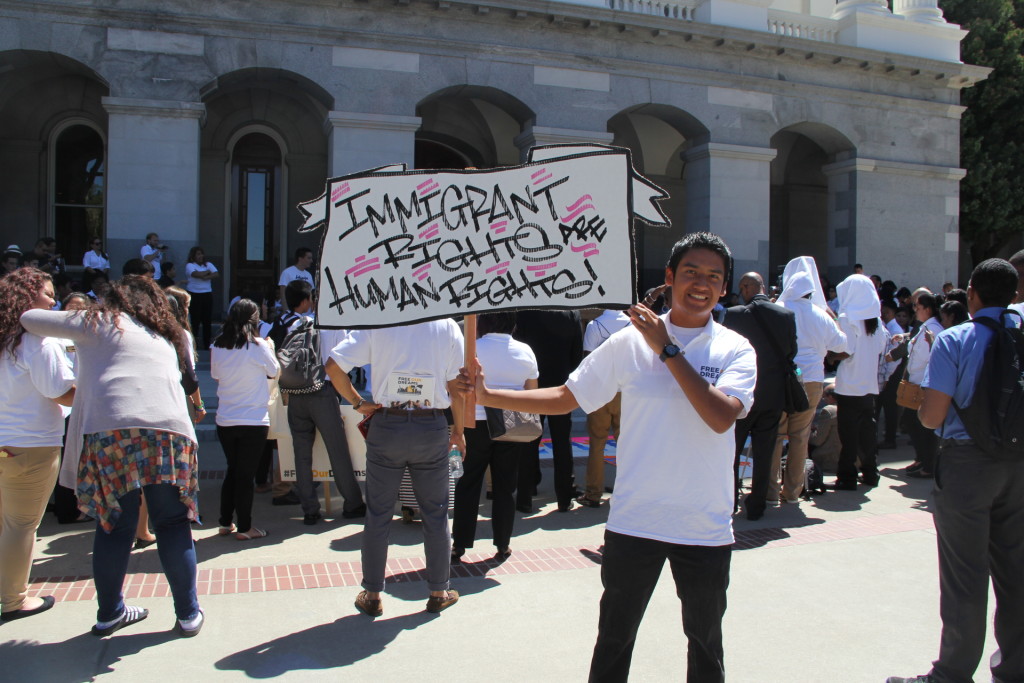 Last week I joined over 200 youth from around the state at the “Free Our Dreams Advocacy Day” at the State Capitol to rally for issues affecting our communities. We met with dozens of legislators to discuss solutions that promote the health, safety and success for young people of color. As the only youth representing the communities of South Kern, I felt a bit nervous going into the event not knowing what to expect. However, I was amazed by young leaders from all across the Golden State, and was proud to be able to represent my community by talking one-on-one my representatives. 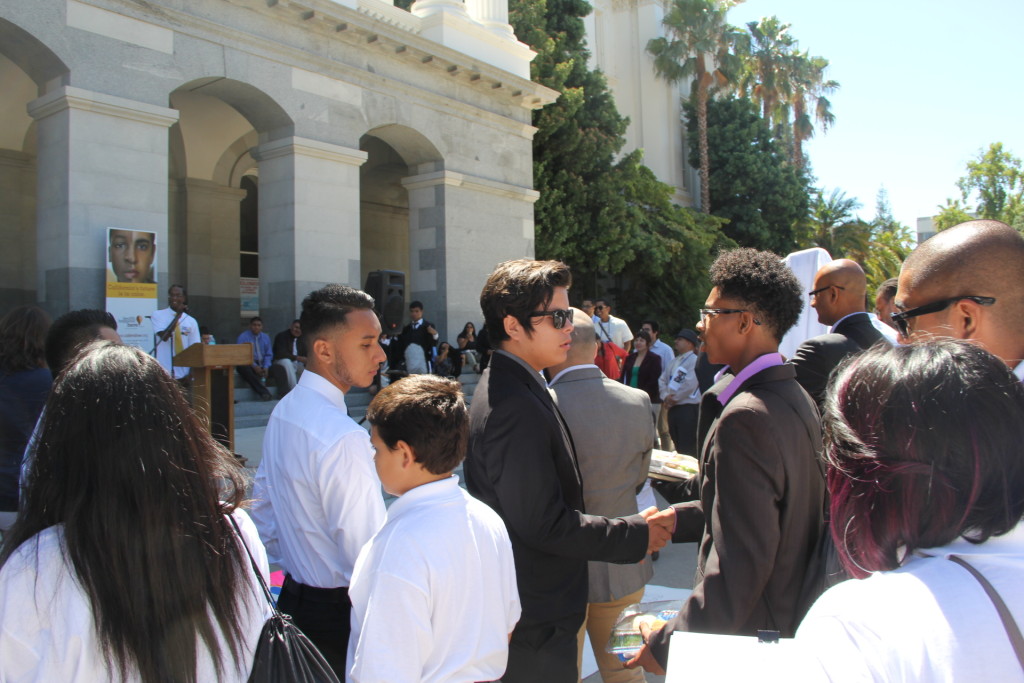 One of the specific pieces of legislation we rallied around during the weekend was Senator Lara’s Senate Bill 4, or the Health For All bill, which would provide healthcare for all California residents, regardless of documented immigration status. Coming from the Central Valley, this bill means a lot to me and those I care about. 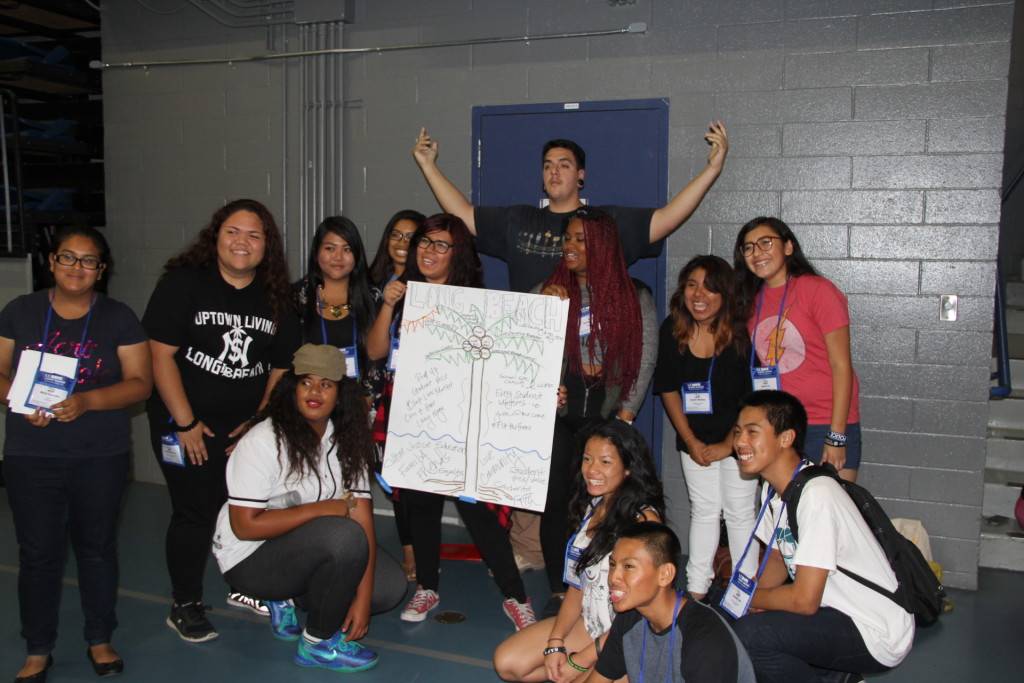 In May of 2016 California will become the largest state to provide healthcare to undocumented children. However, I believe that healthcare should be extended to everyone, not just those under 18. So, while we should celebrate that residents under 18 will be able to gain health coverage, I and other youth leaders will not stop advocating until everyone is able to access care. 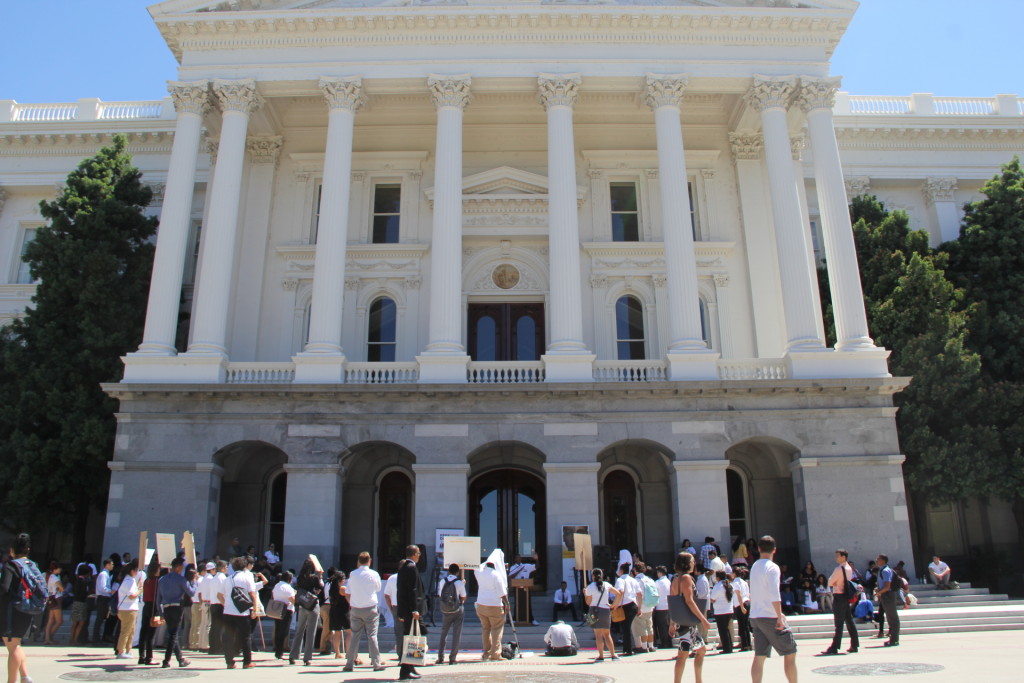 I live in a community where farm workers awake as early as 3:30 or 4 in the morning to get to work and harvest the fruits and vegetables that we all enjoy. I know some are undocumented, and are afraid to even visit the hospital, for fear that they may be deported for not having a social security number. Healthcare should be a right for everyone in this country, and we should recognize that immigrant rights are human rights. I was inspired to make a sign with that exact statement on it, which I held outside the Capitol building. 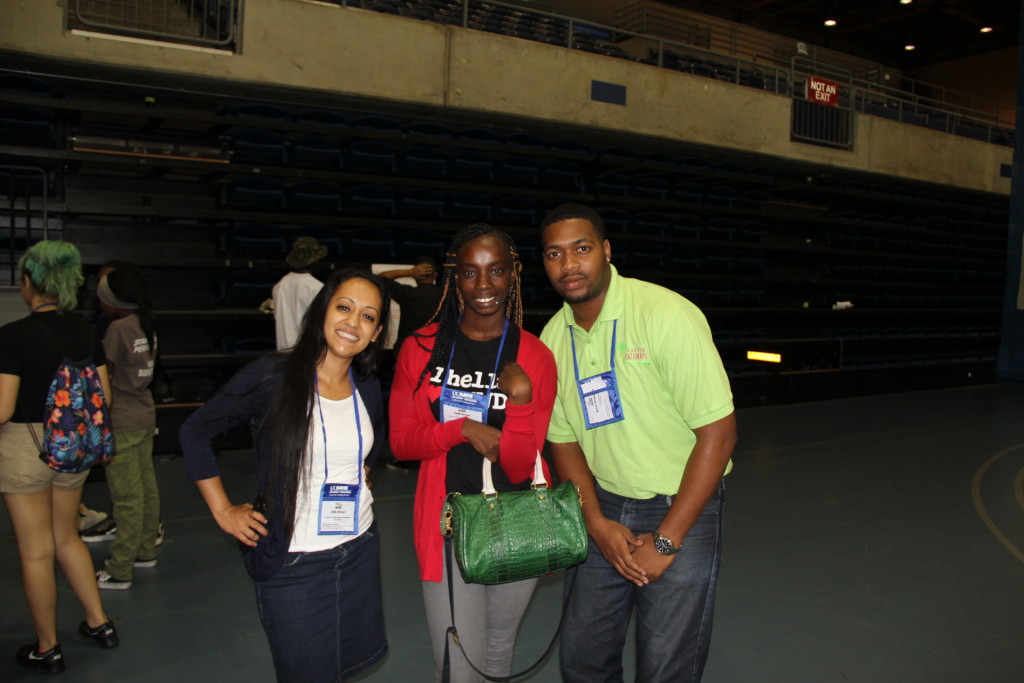 Over the weekend several mentors, such as Daniel Leon Davis, shared their personal stories and inspired youth from around the state. Leon Davis, who was valedictorian at both his high school and college, faced the struggle of growing up undocumented. Although he was offered full scholarships to several different universities, he was unable to accept due to his undocumented status. He persevered, eventually worked for the Clinton Foundation and is now a social media manager for several famous people like Russell Simmons and Nikki Minaj. I was inspired not only by these adult allies, but my peers as well. 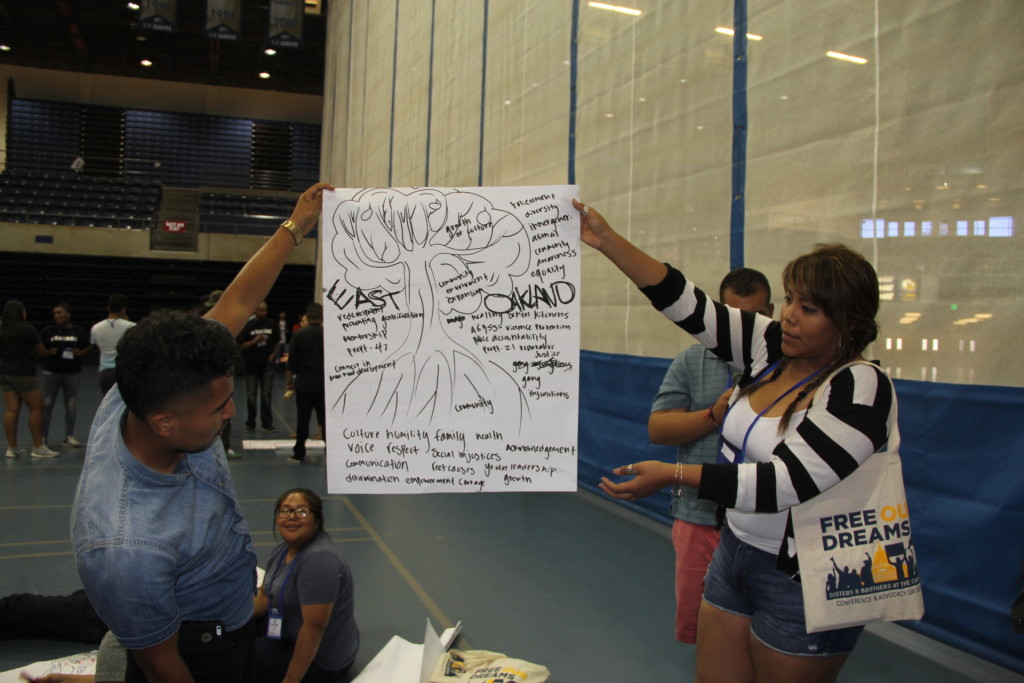 One of these stories that particularly inspired me was my roommate’s. As a younger teen, Kent had gotten in trouble with the law and spent time in juvenile halls all across California. However, with the help of the ARC (Anti-Recidivism Coalition) he turned his life around. Now a political science major and worker at the Los Angeles Chamber of Commerce, Kent remains an active member of the ARC, and advocates for youth in juvenile halls and jails to get proper due process. His story, along with countless others from the youth around me, inspired me to advocate and share my own story with legislators during my time at the Capitol. 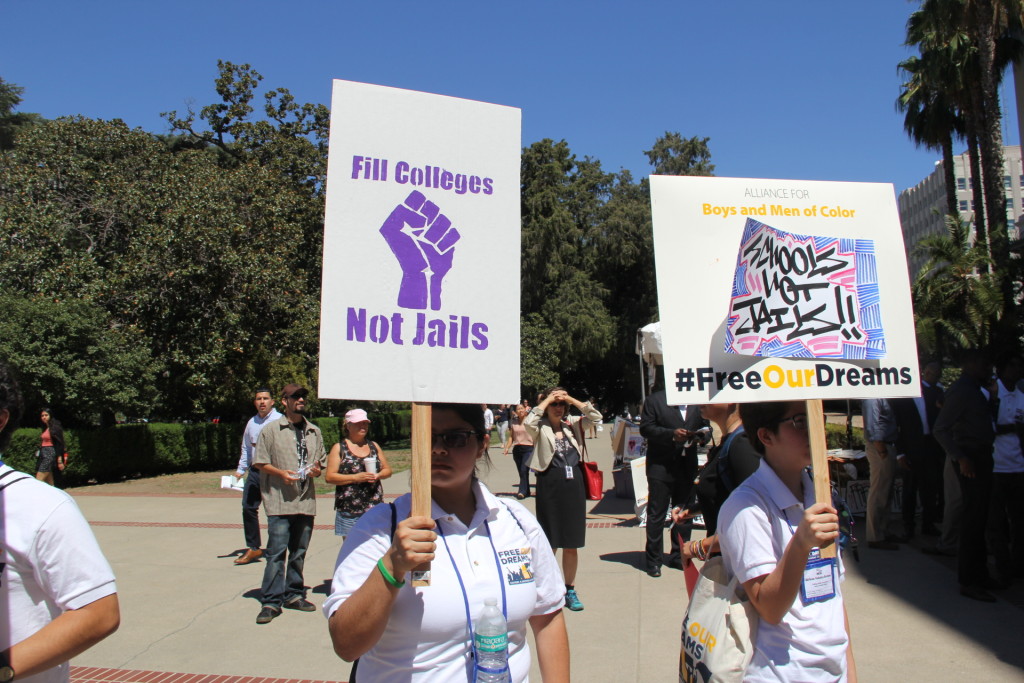 Movement Strategy Center and Policy Link staff worked diligently to make sure every youth leader was prepared to advocate effectively for those issues important to youth from across California. Together, we learned about the legislative process, networking, and communications skills. Upon arriving at the Capitol on Monday, we spoke with legislators at the Assembly Select Committee on the Status of Boys and Men of Color Hearing as well as at the Status of Women and Girls Hearing. Later the group moved outside to rally on the Capitol steps around hashtags like #Health4All, and #moreschoolsnotjails. We finished the day by applying what we learned over the weekend at our individual legislative visits.

I had the opportunity to meet with both Senator Jean Fuller and Assemblymember Rudy Salas (pictured below) during my visit, and was able to talk to them about the issues that are important to me. 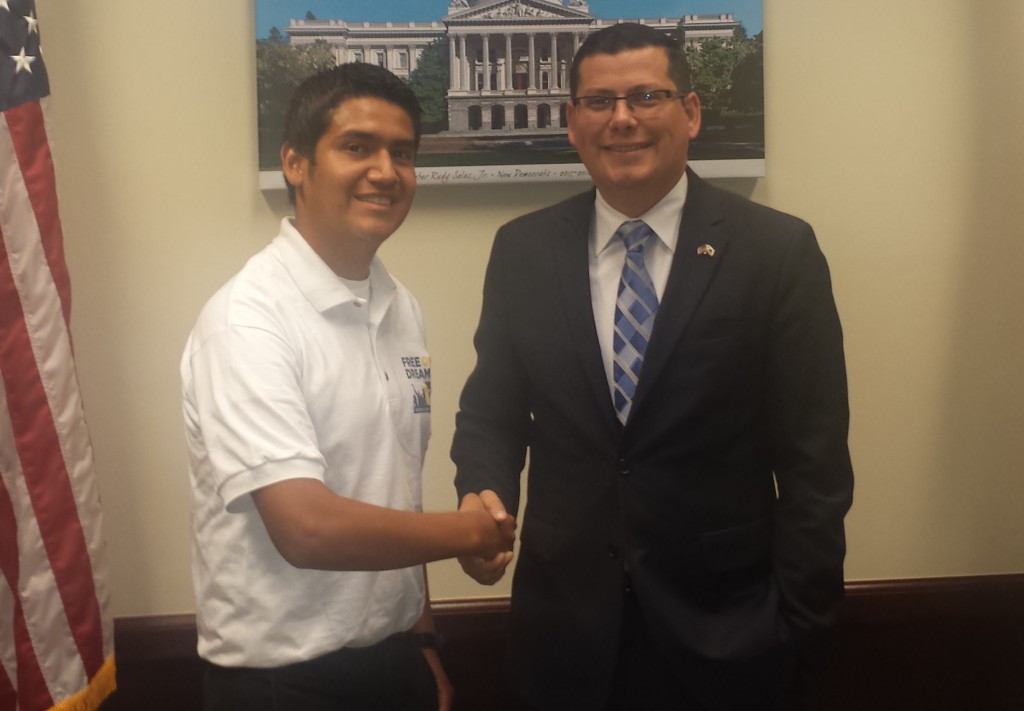 I had the opportunity to shake hands with Senator Fuller,  the Republican minority leader on the assembly floor. Knowing that she has a very conservative record and recently voted against the Health For All bill, I decided I would try to come off as moderate to try to relate to her and get her to talk to me. I talked to her about immigration reform in our community, and how undocumented immigrants should not live in the shadows in Kern County. Her response was that it was really nice to meet me but that she had to go back to the assembly floor to vote on a bill. I probably didn’t sway her position, but I am glad I put my ideas in her head.

I also spoke to legislators about the importance of holding school districts accountable for properly distributing LCFF (Local Control Funding Formula) dollars with parent and community input. I also suggested a bill to Assemblymember Salas: to allow public school facilities to be used by the public when school is not in session. This would allow those who are unable to afford a costly gym membership to still remain healthy and active with access to facilities that otherwise would remain unused.

Overall, I had a great experience learning from other youth, networking with my mentors, and discussing key issues with our legislators.