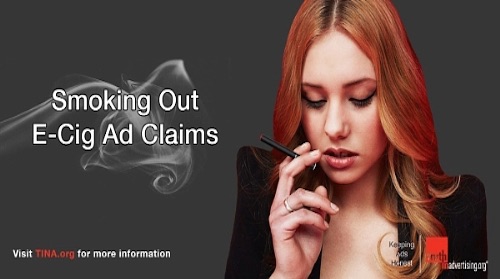 SAN FRANCISCO — A California health watchdog put e-cigarette manufacturers on alert on September 2nd, warning them that if they don’t recall the products they have sold on the California market within 60 days, they could be sued.

The action follows independent lab tests by the Oakland-based Center for Environmental Health (CEH) of e-cigarettes manufactured by 24 companies; 21 of them had products that have high levels of one or both of the cancer-causing chemicals, formaldehyde and acetaldehyde, said Charles Margulis, media director at the center.

The CEH found that most – 50 of 97 products examined – contained high levels of one or both chemical.

Brought on the U.S. market eight years ago, and promoted as lot less hazardous than conventional cigarettes, e-cigarette manufacturers recommended them as a quitting aid for smokers.

The product is also known as a personal vaporizer, or electronic nicotine-delivery system, among other names. Some look like a regular cigarette, others come with a pocket-size vaporizer and nicotine-juice cartridges.

Critics said that in many respects it is not that different from the conventional cigarette. A drag from its mouthpiece gives the person a genuine nicotine fix.

Research findings reported in The New England Journal of Medicine state that “like conventional cigarettes, electronic cigarettes may function as a ‘gateway drug’ that can prime the brain to be more receptive to harder drugs.”

Because major tobacco companies such as R.J. Reynolds have gotten involved in the e-cigarette market, health and environmental groups grew suspicious of claims that e-cigarettes are “healthier than smoking,” and that they contain “harmless water vapor.”

“These cigarettes are promoted as safe and as only containing water vapor, which is a lie,” asserted Dr. Stanton Glantz, a professor of medicine at the University of California in San Francisco and director of the school’s Center for Tobacco Control Research and Education.

“She’s been asleep at the switch on this,” he asserted, noting that just last week she “quietly settled” with some e-cigarette manufacturers in California for violating a consent decree with the state that they would stop selling flavored e-cigarettes.

In the 60-day notice sent out today, the CEH is not only demanding a recall of products already sold, it wants manufacturers to provide “clear and reasonable warning” for products sold in the future, plus pay an appropriate civil penalty for violating the state’s Health and Safety Code.

CEH executive director Michael Green said his agency’s legal action aims to force the industry to comply with the law and create pressure “to end their most abusive practices.”

“For decades, the tobacco industry mounted a campaign of lies about cigarettes, and now these same companies claim that their e-cigarettes are harmless,” said Michael Green, CEH’s executive director in a press release.

A health watchdog is to take legal action in California against the manufacturers of some of the best-known brands of e-cigarettes, following tests to establish the levels of toxic chemicals they contain.

The Center for Environmental Health (CEH) said its tests found that nearly 90% of the companies had at least one brand that produced high levels of one or both of the cancer-causing chemicals formaldehyde and acetaldehyde.

In the first ever large lab-testing of e-cigarettes on the market, the CEH found that most – 50 of 97 products examined – contained high levels of one or both chemicals.

The lab tests and legal action will fuel the battle raging over e-cigarettes. While supporters said they could help thousands of people give up the far more dangerous tobacco-filled conventional cigarettes, others worry about the chemicals they contain.

Such suspicions are fueled by the involvement of major tobacco companies in the e-cigarette market. Critics said e-cigarettes may be a stalking horse for Big Tobacco, in order to rehabilitate the act of smoking.

The CEH said its lab tests of 97 e-cigarette and vaping products revealed levels of formaldehyde and acetaldehyde that violated California’s safety standards. It said this was the first time e-cigarettes had been tested by simulating their real-world use.

“For decades, the tobacco industry mounted a campaign of lies about cigarettes, and now these same companies claim that their e-cigarettes are harmless,” said Michael Green, executive director of CEH.