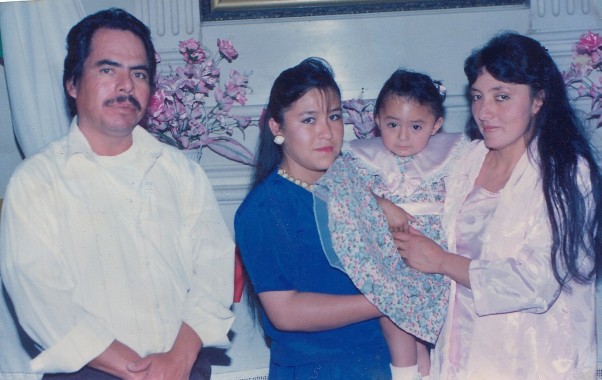 Photos courtesy of the Fernandez family. Above: Maria Fernandez, third from left, with her family.

Story by Miguel Bibanco for The Know Youth Media

FRESNO, Calif. – Maria Fernandez was three years old when she came to the United States in 1993. As an undocumented immigrant she’s faced a number of struggles, including gaining access to quality medical care.

That might have changed after Fernandez – who suffers from chronic back pain – applied for President Obama’s Deferred Action for Childhood Arrivals (DACA).

Before DACA, Fernandez, 24, says the prospect of a substantial hospital bill “just wasn’t worth it. I know it’s my health and that my health shouldn’t have a price tag, but it does and I’m not the one who put it there.”

Fernandez grew up in a mixed status household, with some of her relatives U.S.-born citizens, and others, including herself, undocumented. She was initially reluctant to apply for DACA, fearing widespread rumors that she would “be deported” and separated from her family. But on the urging of her parents, she decided to apply for DACA in 2012.

The federal program offers eligible applicants a renewable two-year reprieve from deportation, as well as work authorization and access to education.

For Fernandez, in addition getting a social security number, a driver’s license, or the chance to work legally, DACA would finally allow her to get the kind of medical care she needed.

Soon after the Obama administration announced DACA in 2012, the president declared that undocumented immigrants, including DACA recipients, would not be given access to health insurance under the Affordable Care Act. But California is one of a handful of states that runs a parallel health insurance program, Medi-Cal, that is wholly funded by state dollars and is available to low-income residents, including DACA recipients.

According to a 2015 UCLA study, 60 percent of DACA-eligible Californians lack private health insurance and are low income. This means that as many as 262,000 DACA recipients in California are potentially eligible for Medi-Cal.

In June, Governor Jerry Brown approved a $40 million budgetary allocation to help cover the cost of providing Medi-Cal for the state’s 170,000 undocumented children.

But after Fernandez applied for DACA, she soon learned that her family had fallen victim to fraud, paying $2,000 for an application that should have only cost $465. Fernandez now works with a group called Students Without Borders, which helps potential DACA recipients avoid the kind of pitfalls she experienced.

Still, Fernandez’ own struggles with getting health care were not over.

When she went to apply for Medi-Cal, a county worker turned her away after she divulged her immigration status, despite the fact that Fernandez was qualified.

Her case is not unique. State lawmaker and chair of the assembly health committee Richard Pan acknowledged at a press briefing last year that the California Department of Health Care Services had failed to issue new guidelines to county agencies on DACA eligibility for Medi-Cal. The failure, he noted, led to hundreds of eligible applicants like Fernandez being turned away.

Fernandez says at the time she didn’t feel like she could question the worker. “You feel like they’re more informed on the topic than you are. It’s their job after all.”

As a result Fernandez remains uninsured. “I honestly haven’t wanted to go back after I was rejected.” Between a busy school schedule and work, Fernandez is hard pressed to find time to return to the county office and restart what she describes as “not an easy process.”

Still, she says she does plan on seeking help from Centro La Familia, a non-profit organization based in Fresno that offers assistance with health enrollment and that she is hopeful that she will one day become insured.