#WordsMatter — No Human Being is ‘Illegal’ 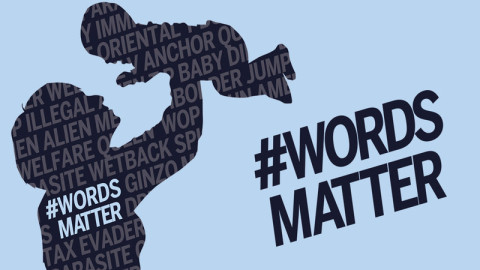 As a child, I thought anyone born on this earth was part of the United States. I did not know what being “legal” or “illegal” meant. When I heard the word “illegal,” I automatically thought about drugs or murder. So when I began to hear people being called “illegal,” I wondered whether it meant these people were as bad as drugs and murder.

Then I started to see terms like “illegal alien” and “illegal immigrant” in the news. It seemed like everyone was reporting on what these “illegals” were doing. But I still didn’t understand why these people, who looked like me, were being branded “illegal” when really, they are just undocumented.

I personally know the struggle undocumented people go through just so they can work toward a better life for themselves and their families. My father was undocumented until I was 10 years old. All I knew at that early age was that we needed to be careful. I remember hearing the words “illegal alien” thrown around, and I immediately wanted to hide my father, just like Michael and Elliot tried to hide E.T., because that is what I thought it meant to be an “illegal alien.” I felt like it was my job as an eight-year-old kid to protect my father’s identity, and I thought if I tried really hard, no one would know that my father didn’t ‘belong.’

Growing up in the Eastern Coachella Valley, a predominantly Hispanic and Latino community,  I can tell you that my family’s experience is no different than hundreds of other families who live here and across the nation. And because I know these undocumented people are my neighbors, family members and friends, I care about the words they are called.

Even when I first became a youth journalist at the age of 14, I took seriously the way I spoke about others, and I still try very hard to represent people honestly and fairly in all my stories.

Isn’t it time everyone, including the media, do this too? Words do matter.

The media has a huge influence on how people in the United States view immigrants. Large media networks like CNN, the Associated Press and the New York Times set the tone for how people in our country talk about immigration and immigrants.

Whenever I hear reports about “illegal immigrants” in the news or see the term in articles, I feel deeply saddened because the word “illegal” is dehumanizing and no way to describe a human being.

I was encouraged when I found out that Define American and the National Association of Hispanic Journalists started a petition to urge the New York Times to update their editorial guidelines and to stop using the word “illegal: when describing undocumented immigrants. As of now, the petition has 2,763 supporters.

Both CNN and the Associated Press have already committed to stop using the word “illegal” when describing undocumented immigrants.  It’s time for the New York Times to do the same.

I encourage all media organizations to stop using the word “illegal” when talking about undocumented immigrants, because there’s nothing illegal about being human.

Karla, 16, has been a youth reporter with Coachella Unincorporated for two years covering issues like voter registration and community violence prevention. In April 2015, Karla was awarded the Young Lady of the Year Award for Riverside County District 4. View Karla’s author page here.