Activists Call on Courts for Action on DACA/DAPA 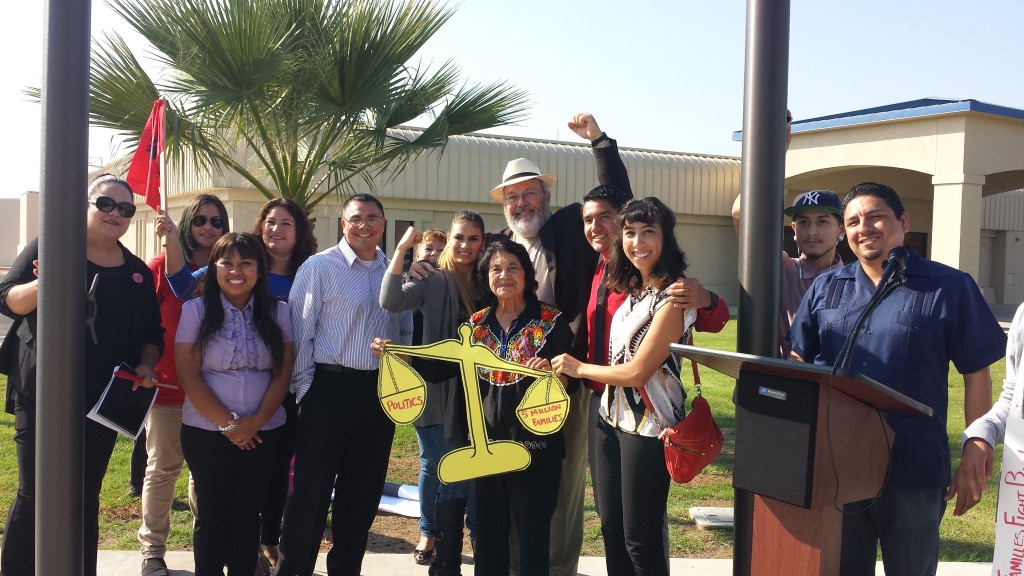 Today I joined with Dolores Huerta and the Kern Coalition for Citizenship in calling for action on two federal programs that would protect thousands of families from being torn apart.

Standing in front of the recently opened Mesa Verde Detention Facility, which houses hundreds of detained immigrants, speakers included Huerta and Cal State Bakersfield Sociology Professor Gonzalo Santos, who decried the political “game of football” being played out in the nation’s courts where undocumented immigrants are “the ball.”

In November 2014, President Obama announced an expanded version of his Deferred Action for Childhood Arrivals (DACA), raising the age limit on those eligible for temporary relief from deportation. He also announced a new program (DAPA), allowing undocumented parents of U.S. born children or permanent residents the same relief.

Not long after his announcement, the 8th Circuit Court in Texas ruled the programs unconstitutional. The case then went to the 5th Circuit, where it remains despite the court’s own guidelines requiring a decision within 60 days.

Immigrant rights groups say the delay is part of a strategy to force the issue beyond President Obama’s tenure. Many expect the 5th Circuit to rule against expanded DACA and DAPA, leaving the federal government to take the case to the Supreme Court. But it will need to do so before the fast approaching deadline if the case is to make it onto SCOTUS’ docket for 2016.

In the meantime, a looming cloud of uncertainty remains over thousands of families here in Kern County and across the country.

Take for example Soledad from here in Bakersfield. Soledad has two beautiful children born here in the United States. She found love and married her husband, a U.S citizen. Her husband unfortunately became ill and passed away recently.  Before passing away, he had petitioned for Soledad’s citizenship. She now faces imminent deportation. Soledad has remained strong, raising her children and providing for them. Under DAPA, as the parent of U.S. born children she would not be facing deportation.

This is just one such case. With 5 million undocumented immigrants and their families in limbo, it the court’s moral and legal responsibility to take action and deliver a decision.

Tuesday’s event was organized by United Now for Immigrant Rights (UNIR), a coalition of community organizations and Cal State student activists like myself. Our focus is to advocate for just, comprehensive immigration reform, and humane immigration laws at the national and international level.

As a resident of South Kern, I know that DACA and DAPA will help so many people. Families will no longer have to worry about traveling out of the city, or out of state to see relatives. Law abiding undocumented immigrants will be able to contribute their communities openly. Most importantly, the shroud of fear will be lifted from over of the hearts of many families, and undocumented immigrants will no longer be forced to hide in the shadows.

I and other UNIR members await the court’s decisions and will continue to fight until our demands are met. Si se puede!