Reflections on a Weekend Devoted to Youth Media 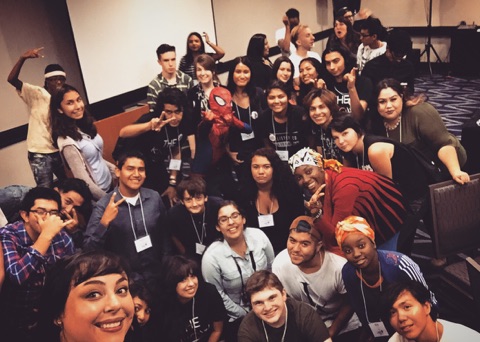 Univision journalist and anchor Jorge Ramos, who recently gained attention for standing up to GOP Presidential contender Donald Trump, explained the work he does as “being the voice of those who don’t have a voice.” That powerful statement was a validation of the work that I do as a youth reporter for South Kern Sol.

Over the weekend, I got the chance to meet other young people from around California who share that vision.

Dozens of youth reporters met for the Building Healthy Communities Youth Media conference in Los Angeles last Friday. The two-day event gave us a chance to connect with each other and to hear from experts in the field about how to deepen our reporting and broaden its reach.

Carlos Molina with the Sons and Brothers campaign urged youth attendees to “dig’ deeper,” to move beyond one person’s story to show how the system is working in such a way to “exploit individuals.”

The highlight of the event, though, was meeting the other youth reporters from around the state.

Miguel Bibanco is a writer with The Know Youth Media in Fresno. I was surprised to learn that he has written and advocated for the same issues in Fresno that I’ve written about in Bakersfield. Miguel has done stories about those in the community who lack healthcare, and about the challenges that Dreamers and other undocumented immigrants face.

Listening to him, I understood more clearly how the demographics and socioeconomic divisions that exist in South Kern are also present in Fresno. I also took heart in knowing that, like me, Miguel isn’t afraid to write about what he believes in and what needs to be reported.

I also met Mackenzy, a reporter for Redwood Voice in Del Norte County. Mackenzy shared with me the pressing education challenges for young people in her community, including the fact that the nearest four-year university is an hour and a half drive from her home.

What I came to see during the convening was that from San Diego to Del Norte, young people across California are facing similar issues, and that some of us are highlighting these issues by engaging with our communities through reporting and storytelling.

I was impressed with every single youth journalist and reporter that I met at the conference, from the way they spoke, to the samples of their newspapers and podcasts. I’m honored and humbled to be a part of the Golden State’s youth media network.

Overall, the gathering motivated me to continue spreading information and producing content on issues important to me and my community. I will continue to write as I realize the true meaning of the statement, ‘The Pen is Mightier than the sword.’