Thoughts From a ‘Proud’ Anchor Baby 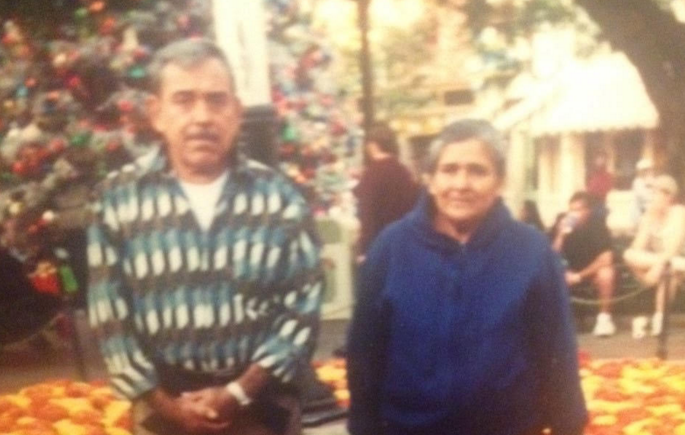 South Kern Sol, Anonymous, photo above: the authors grandparents in 2002

My grandfather passed away in Mexico earlier this year. I had not seen him in more than ten years, but I remember his face, his voice, and his calm and gentle personality. What broke my heart was seeing my father suffer in sadness. It has been more than two decades since he has seen his own parents.

Knowing that my father couldn’t even attend his funeral, I broke down. Now, even as my grandmother continues to grieve, my family cannot go to see her.

Like many other immigrants across this state and the nation, my parents came to California from Mexico seeking opportunity. They created roots and began to raise their family. I was born here and am a U.S. citizen.

I have spent most of my life wanting to feel more security for my family, often fearing I would wake up finding they have been taken away from me and my siblings. Growing up in a mixed status family is to experience these fears daily.

In November, the 5th Circuit Court of Appeals upheld a lower court’s ruling that President Obama’s executive action on immigration, known as DAPA, was unconstitutional. DAPA, or Deferred Action for Parents of Americans, would have exempted millions of parents like mine with U.S. born children from deportation. The court’s ruling will effectively keep DAPA in limbo until the Supreme Court agrees to take up the case possibly next year.

With DAPA, my dad might have been able to travel to Mexico to attend the funeral, and to see my grandmother without fear of being denied re-entry. Instead, my family will continue to suffer from the sense of loss that comes with separation. I have not felt the warmth of my grandmother’s hug for years. I’ve been unable to taste the deliciousness of her home cooked meals, or even see her beautiful smile through anything but a photograph.

Because of our broken immigration system, my parents cannot pay a visit without the risk of not being allowed back.

I am grateful that my family has had the opportunity to make our own little American dream right here in California. Things have not been easy. My parents have made huge sacrifices so that me and my siblings can have a chance at an education and an opportunity to thrive in the world.

When my parents were sick, we worried about their lack of health insurance and feared that doctors would question their immigration status. When I got sick, I hesitated even asking my parents to drive me to the doctor, knowing that driving anywhere was a risk.

Thankfully, with the passage of AB 60, my parents were able to get driver’s licenses. And with passage of SB 4, undocumented kids across the state can now access health care. These steps have helped ease some of the anxiety for families like my own.

Still, in spite of the progress, there are those who want to turn back the clock.

But maybe that’s not such a bad term, because I’m grounded here in the United States, and until we see meaningful immigration reform I will fight until no human being is labeled “illegal.” I am a proud citizen who cannot wait to share the moment of joy when my family no longer has to live in fear.

So call me an anchor, because I am what will keep my family’s ship together until we are ready to sail toward a future together in this country.

This first-person essay was produced for South Kern Sol, a project of New America Media, in collaboration with Ready California (Ready-California.org), a statewide coalition working to ensure that the maximum number of eligible Californians benefit from DACA and DAPA.