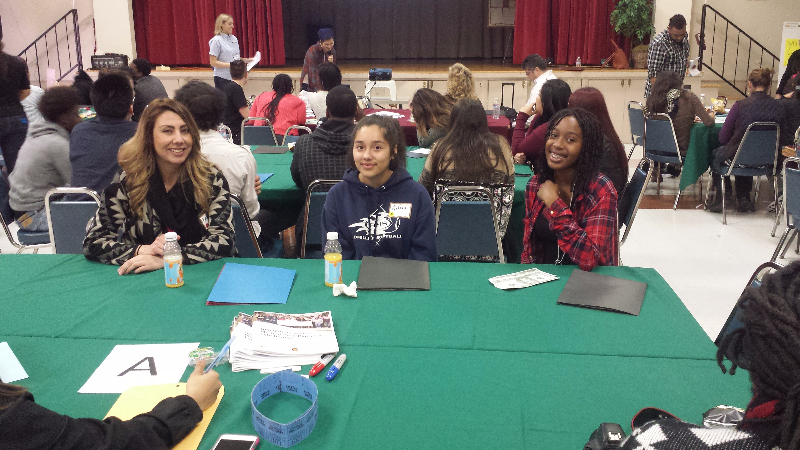 Several dozen students from around Kern County gathered last week for an event focused on educating them about their rights as students, including how they can use the state’s new school funding formula to hold their own schools more accountable.

“We’re here to convene youth to really educate them on issues … stopping the school to prison pipeline, to address discriminatory suspensions and expulsions, along with budget fairness,” said Gerald Cantu, a representative from the Dolores Huerta Foundation (DHF), one of the organizers for Friday’s event.

Billed as a Youth Summit, the event opened with a series of spoken word performances, followed by a conversation around the Local Control Funding Formula (LCFF), which took effect in 2013 and reshapes the way California funds public school districts, giving greater priority to those serving more high need students.

“I didn’t know that we had so many low income students and foster children in our schools,” said Golden Valley student Aileen Rodriguez, who attended the event. “And I had no idea how much money we’re supposed to get from the district.”

Students also learned more about how they and their parents can hold their schools accountable through what is know as the Local Control Accountability Plan (LCAP), which districts must adopt and update annually after soliciting community input. The LCAP outlines how districts will be using the money they receive under LCFF.

Students were then quizzed on their rights. Questions ranged from whether a student could be suspended for absences to whether a pregnant student could be prohibited from participating in school functions. Students responded by holding up signs with their answers.

“I feel like I really learned a lot about my rights as a student, and what [school districts] can and cannot do,” said one student at the event.

Dolores Huerta and representatives from the DHF closed off the morning with speeches on the importance of community organizing and civic engagement. Cantu stressed that the “most important thing is that [students] see the necessity of organizing and being active through civic engagement and the decision making process.”

The event also featured a variety of workshops on such topics as LGBT rights and identities, teen pregnancy, the school to prison pipeline, and implicit bias, which Chris Bridges from Equal Justice Society explained as prejudices and stereotypes that people hold even when they aren’t aware they are doing so.

Other organizers for the Youth Summit included California Rural Legal Assistance, Greater Bakersfield Legal Assistance, and Building Healthy Communities South Kern. Representatives were also on hand from organizations like Planned Parenthood and the Gay and Lesbian Center of Bakersfield.

Karla Padron, a mentor from Golden Valley High, said her students learned a lot from the event. “These young ladies at school are going to take all this information with them … They’re really excited and having a great time.”

Padron adds that students need to get in the habit of voicing their concerns. “A lot of students now are being hurt in one way or another and they don’t voice it … But what I learned today is that every student has their voice, and should let their voices be heard.”

She adds that in this way they can help foster a safer and more comfortable environment at school.